The latest update to my Markan commentary is here.
(Updated January 11 2011)

How a cyclist sees Adelaide

Take last Friday, when I had an appointment in Unley. Taking the car, I'd allow half an hour from our place, and take Shakespeare Avenue through the Gums Reserve down to Glynburn Road. In the middle of the day I'd take Glynburn through three sets of lights to the Greenhill Road roundabout, and then negotiate eight more sets of lights to get onto Unley Road. This is not counting any lights at pedestrian crossings.... Read on >>>>

Today's ride left Waterfall Gully and meandered in a 22km loop around the park on the beginner and intermediate paths, returning to Adelaide down the Old Bullock Track from near Measday's Lookout on the old freeway. This would also be a good day walk.  Read on >>>>

Burra is around 160km from Adelaide by car. The bike friendly routes are a scenic delight and cover some of my favourite South Australian country. This is the story of two round trips, and what can happen when it rains. The plan was for a 'non-stop' loop up and back, which I managed both times, but only the second trip was able to stay on the planned course. The course was designed to maximise the distance spent off the bitumen.... Read on >>>>

And begin to live again...

The truism says every age thinks it's the one where something truly significant is happening. It's always said with hindsight, safely separated from the disaster or event in question. But our time is the moment in which we must live, and at the moment we are watching with horror as the deranged president of the United States seems hell bent on accelerating the decline and fall of his nation in order to satisfy his own narcissism. If this tragedy, which will reshape the world, and if the current pandemic were not enough, they are distracting us from the accelerating climate catastrophe which according to the science, not to opinion, will cause unparalleled suffering, and which risks societal collapse, and may threaten our very survival. How do we live in this? What does the gospel say?

I'm currently working in the Gospel of Mark and for some reason thought of the two women in Chapter five. Does this story say anything to us in our predicament?

This was a 238km loop with lots of gravel. I wanted to ride Niblet Gap as a little joke between friends, but it's also a way to see some really remote farming country. Niblet Gap itself is only about a kilometre, so strictly road bikes would be a fairly easy carry through. The Tothill Range area to the east of Robertstown has numbers of similar tracks cutting through the ridges. Read on >>>>

The Gift of Tully Harris

It was clear the papers were correct about people not going to the doctor during lock-down. Because within ten days of seeing my own doctor, I was sitting in a socially distanced chair outside the office of a skin specialist: one Dr. Tully Harris.

I wondered if he was the same Tully Harris who had been in the youth group of a congregation where, years ago, I had filled in for a few months. He would be old enough by now.

That Tully Harris had been a quiet kid who seemed to live in a universe which occasionally intersected with the one the rest of us were in. But he had a skill which the youth group were keen to show the new minister: Out on the basketball courts, Tully Harris sat backwards on his pushbike and rode a perfectly symmetrical figure eight across the asphalt...  Read on >>>>

I've wanted to see a stretch of road between Truro and Eudunda that I've only ever ridden late at night, so this trip was the opportunity. I setup the route for scenery and low traffic rather than minimising distance, and to allow me to get the whole thing done in a long day without being heroic about the time on the bike.... Read on >>>> 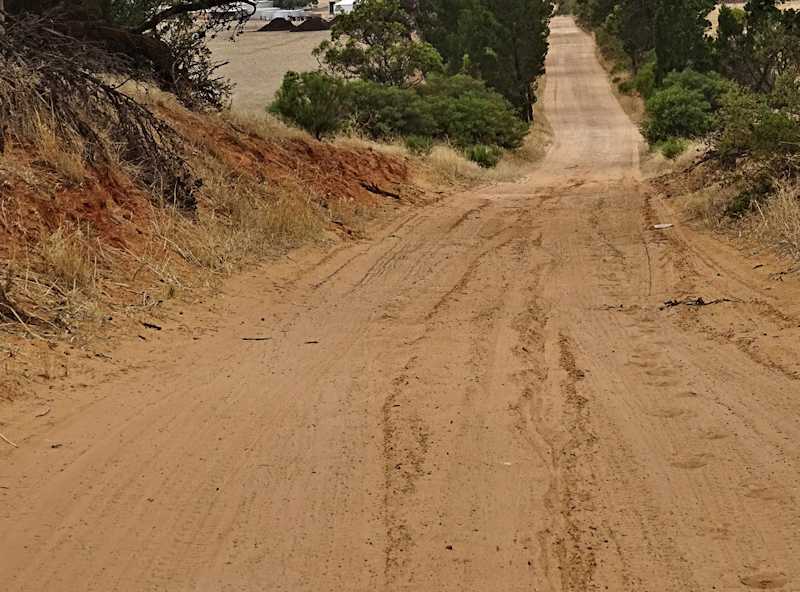 March 2020: The plan was to ride to Leigh Creek, and return, over three days, a 1,000km round trip. The weather had other ideas, with 30+km east and south-east winds forecast for the weekend. These autumn winds were not expected to drop at night, which ruled out what is often an opportunity to make up a bit of time. In the end I put in about 800km on a modified course... Read on >>>>

Angaston to Willunga, via the bike paths

I often tell people you can ride from Angaston to Willunga, and do in on bike paths and back streets. I've wondered about doing it as a full loop in the one day, and here it is.

Google will take you from Angaston to Willunga through the hills; 121km, or you can take the highways and expressways through the city. That's 133km. By bike and bike path, it's about 150km.

The possible routes are endless. I took a fairly direct route from Elizabeth to Willunga, and then had fun linking together a whole heap of paths on the way back to Angaston. From Angaston, I took the quickest way home if I stayed on the path. It resulted in 330km all up... Read on >>>>

This site is about celebrating life. My own life is too busy; my work is almost designed to keep me from reflection and enjoyment. In the busyness and competition of life, it is hard, especially for men, to be honest about fears and feelings. All this works against celebrating and enjoying life except in a most shallow fashion. So here, I seek to be unbusy.

One Man's Web has grown haphazardly, reflecting the interests of friends and myself. You will find abandoned blind alleys, ideas we no longer adhere to, things we never believed but "hung out there" to see what would happen. There are areas where I am remain passionate, but can't keep up; the area on Australia's refugees is one.

If you find some enjoyment or challenge here, I am glad. Celebrate life!

Twenty Years
The Pictures on This Site

First Impressions of the Lectionary