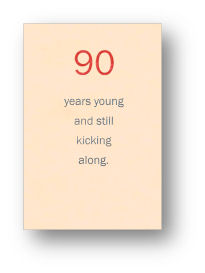 How do you talk about 90 years in a few minutes? Considering this I remembered an incident from the Vietnam War years.

A couple of blokes from the local Lions Club came to Hilltop to interview me as a contestant in their Lions’ Youth of the Year competition.

I brightly announced, among other things, that I intended to be a conscientious objector. Mel, the World War Two veteran didn't even blink.

Some less kind people would suggest that this was because he was doing the crossword, as usual, and just wasn’t listening.

In fact, I think the incident sums Mel up very well; he was unfailingly supportive of us, along with Mum, and encouraged us in everything we had a try at.

He still does—although he quite often has a computer question, at the same time. 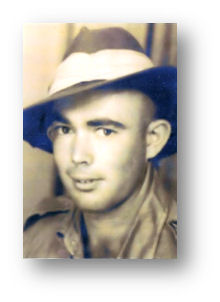 He was his own man, and not restricted by the fashions of the time... and this is still the case.

Anyone over 40 knows that, at school , you got to choose between doing commercial subjects or academic. Mel’s Intermediate Certificate is probably unique in its time. He insisted on doing both academic and commercial. 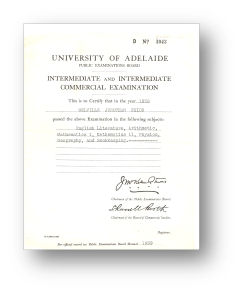 In that period of the Vietnam War, Mel resigned from the Liberal and Country League over the issue.

Although a veteran of the Pacific War, he and Mum would later take in an exchange student who was Japanese. He took her and others on a state-wide sightseeing tour.

In the eighties when some 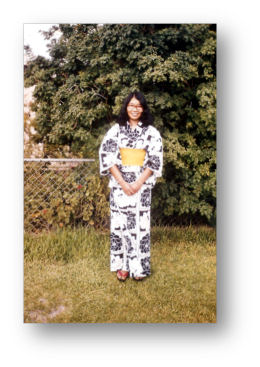 fellow farmers were predicting the demise of the farming sector in particular, and the end of civilisation in general, Mel was pro Aboriginal Landrights.

He is a long time, and active member of Friends of Unity, the Uniting Church support group for Gay and Lesbian people. In that group, like so many others he has been a part of, he is held in high esteem.

He marches to his own tune, and is remarkably tolerant of others. A couple of years ago he said a few trenchant and, let me be clear, very well deserved words in criticism of a former colleague of mine. It struck me that this was the only time I could remember Mel really give someone a serve!

At least some of this tolerance comes from his very relaxed attitude to life and people. He is mostly unflappable. Perhaps it’s all that chilling over crosswords— although I should point out that crosswords are the one area of life where Mel is completely lacking in moral boundaries. If you leave an unstarted or partly finished crossword around the house, he will do it for you.

More evidence of this relaxed nature: many of you know that farm children are taught to drive at an early age. I began at three, holding the steering wheel, while Mel, my hero, fed sheep from the back of the ute. 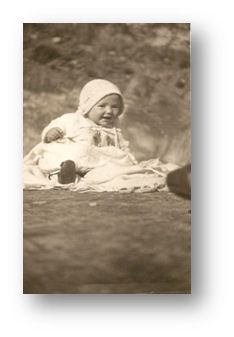 You know how this works. When the last bag is empty the farmer jumps off, thunders down the side of the vehicle, and in a graceful piece of agricultural ballet, the child slides to the left as the Father slides into the cab of the moving vehicle.

I wanted to help, and I had observed that the middle pedal was used to stop the car. Remember that Mel was of an impressive and not inconsequential build in those days: as he rumbled up to the door and gave me the nod to shift over, I smiled at him, slipped forward off the seat, and stamped hard on the brake—

I don’t think the driver’s door ever forgave me, but Mel, after picking himself up and dusting off, calmly explained that you needed to use all three pedals to control the ute successfully. And also that it was wise to warn people if you were going to stop in a hurry. I felt quite affirmed by the experience!

I suspect that when it was Beth and Kathy’s turn to drive the ute while the sheep were being fed, they were under strict instruction not to touch the brake pedal.

It was a little different from the time when I begged to be allowed to start the ute, when he and the girls were on the back. Beth and Kathy took great delight in telling me the swear words he uttered after the initial bellow when he was launched into space with two bags of barley, on account of my less than gentle take off.

But even then, he let me drive us home.

This was one of the rare occasions I ever heard Mel swear—apart from when dealing with sheep and sheep dogs. Even Mel’s patience could be tried on such occasions. When we were all very small, I remember Murray and Robin tearfully going home from the shearing sheds, to tell Auntie Isobel that Uncle Mel had yelled so loudly at Trigger the dog, that Trigger was hiding under the Ute and wouldn’t come out.

He is remarkable. We were always safe with him.

Life began, according to the birth notice in The Advertiser, ‘at Mrs. Phyllis’ of Georgetown;’ more prosaically, the Georgetown Hotel.

Mel was the first of seven brothers and sisters, born in 1921.
He was an excellent school student, and clearly adored by his younger siblings.

He was also a bit of a young man around town: you can see here that he was quite the dapper chap. 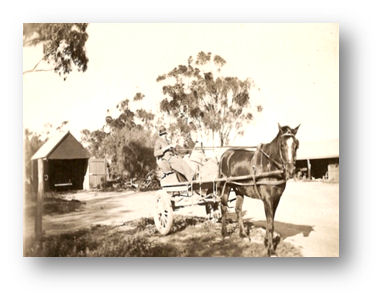 Mel was a member of the Gladstone Rifle Club for many years, and a good shot.

But we knew him as a gentle man who used to shoot over the heads of the kangaroos in the crops, so that they would just run over to Heaslip’s. The little Heaslip boys told Kathy that, “Mel has a gun, but he doesn’t use it much.”

Despite my acclamation of his gentleness, it appears Mel was not completely beyond a stoush.

“Who was that chap at Laura that Mel never got on with at football,” Uncle Trevor asked Uncle Neville, recently. “Ah... Yes. Cleggett. It was always a bit of a butcher’s picnic when Gladstone played Laura,” Trevor told me.

Mel was a good farmer. Like his dad before him, he won crop competitions. He was made a Life Member of the Bureau of Agriculture. 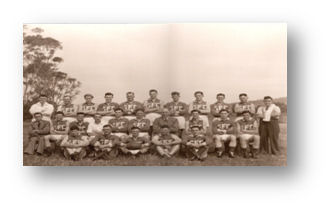 Perhaps the greatest witness of his farming nous can be seen in a story Grandpa Wilkin told me.

Grandpa suggested to young Des, dad’s brother, that he should spend more time at Bureau meetings and less time at what we might best call other meetings. This would make him a better farmer.

Mel’s expertise was not limited to farming. He was on the Crystal Brook Hospital Board since before I could remember. He was on the Methodist Church Leaders’ Meeting. He was co-opted to the Advisory Board of Agriculture and to the CFS Board.

He was a local councillor at Gladstone for 15 years and, like his father before him, chairman of council for a number of those. He would often be out multiple nights per week. Someone once said to Kathy that Mel was remarkable. He said about some local council negotiations that “Mel is the only one who actually listens!” 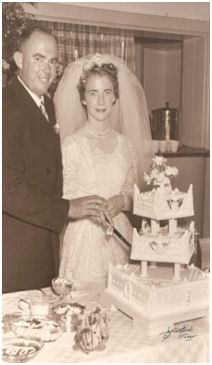 Mel and Joy were married in 1954. There are three of us kids. Beth is the elegant and intelligent one. Kathy, pictured here with her partner Richard, is the scholar, and I just have my good looks.

I’m married to Wendy and we have provided a couple of grandchildren.

Debbie is the artist of the family.

Although this photo may not be useful in identifying Chris, you may have seen him hanging around stobie poles in the past.

Over the years, Hilltop and now Galpin Avenue, have been a stopping point for many people. I shouldn’t think there are many people who run out of petrol in Mel’s street, but there were plenty who walked up the track at Hilltop and received a hand. There are probably not so many young fellows wanting a place to hide their car before the honeymoon here in Victor, either.

But even in Victor Harbor a constant trickle of former school students, neighbours, board

members, brothers and sisters, exchange students, and nieces and nephews, children and grandchildren have all been accommodated and made welcome.

Mel has not stopped being on committees and in groups, or doing the financial books for people. Probus and Neighbourhood Watch and various groups at Adare have all benefited from Mel’s membership. He’s driven for Meals on Wheels for some twenty years.

And he still walks; new hip and all.

We used to see Mel set out along the edge of the scrub, for an afternoon checking on sheep. The dog would be ranging around him, the cow following behind, and if you looked carefully behind that, you would see the cat’s tail poking up through the grass as it brought up the rear.

It hasn’t stopped here in Victor Harbor. In fact, a lady down the street rang up Joy all concerned, not too long ago, because she’d seen Mel out jogging.

Wendy and I took the dog for a walk one Christmas evening and noticed that he was limping. We found the poor chap’s paw pads were nearly raw. We discovered that he’d had a walk with Joy that day, after lunch. It turned out that Beth had also taken him for a walk— and what she calls walking the rest of us call running. We began to realise the poor dog had probably covered a few miles that day.
At this point Mel suddenly emerged from the paper, and yet another crossword, which all goes to prove that his deafness has a selective component, and announced that Dancer had also walked down to the main street with him. Mel and Dancer were natural friends; always up for a walk together. And there were no sheep to complicate matters.

Victor Harbor has also been the occasion for new adventures. Mel and Joy joined one more committee; The Grey Nomad’s Society. The Toyota Van has covered more of Australia than most of us, only being left home for a couple of overseas trips.

Mel has remained sharp throughout. At one campsite, duly warned about the thieving Kookaburras, Mel spotted a high speed, diving intruder targeting the table. In a valiant effort to rescue his jam and toast he also lunged at the table.  I’m not sure what happened to the toast, but Mel ended up with a handful of Kookaburra! It is an open question as to whether Joy, Mel, or the kookaburra was the most surprised at this outcome.

It’s been an interesting few weeks, as I have scanned photos and talked with Mum and Beth and Kathy about Mel; our Dad. We’ve remembered all the funny stories, of course. But I think we have been struck by the quality of this dear man. He has given an enormous amount to his community. He has given even more to us. I doubt if we will ever fully realise just how much. Thank you Mel.

And... Happy Birthday— you absolutely deserve it!

Dad
Marion 22-02-2017
Have just read this for the first time Andrew. It is beautiful and beautifully written. Makes me realise I hardly knew my own dad at all.