It's interesting to catalogue my 'unbidden memories.' These are the memories of my past which come back unbidden, and often.

There is going shooting with my dad, and kicking a footy with him. I remember playing hide and seek with mum and dad, and how upset I was when they got 'home' before I did. I was beginning to realise, I think, that I was separate from them, as they stood their laughing and hugging.

The unbidden memories of my mum are of discipline. It was not harsh or inappropriate discipline. But these are the memories that come unbidden. I have other memories of her, of course. But these come back into focus after I begin to purposely reflect on my childhood. What comes unbidden, is learning to do right, and getting into trouble for doing wrong.

My mother was an all powerful figure. Dad worked long hours on the farm. I was alone with her. She ruled the roost. As I watch my family, I see my daughter becoming one with her mother. They laugh at the same things. They are both stubborn, and incredibly courageous. My daughter is becoming a woman. My son is leaving his mother. He's still into cuddles. But he is seeking to be a man. He follows after me.

Men's movement people talk of the need to leave the mother. We need to latch onto a man, to learn to be a man. And men have often been absent… at work or at war, and now in our time, just not there, as mum is bringing up the family on her own.

There is a need for getting free of the mother that is not well done in our western society. It interests me that the pre-Raphaelite art that is so popular on posters has three strands. There is the siren— the dangerous, tempting woman. There is the sex-object, dependent, idealized type. Both of these reveal unhealthy male attitudes. There are also a couple around where the woman is elevated to Mother.

The princess knights the young man in a work of E. Blair-Leighton's. In Dicksee's La Belle Dame Sans Merci, the woman looks down from her horse on the man, who stands arms outstretched looking up to her. In the poem La Belle Dame Sans Merci she is a sorceress. But who knows that in your average Australian poster shop? We look up to the woman, bow down to her and idolise her, keep her happy. She is mother with whom we began the process. Many of us are yet to be free of her. She is still seeing us off from home each morning. 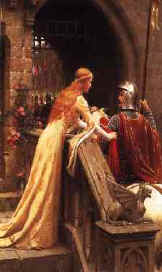 As men we often fit into these three areas. We idealise the women around us. Or we are misogynist: From here comes the sirens or the weakling woman we must protect. Or we seek to keep them happy. All of these are mother: all powerful and dangerous, all powerful and full of beauty and sustenance for us, all powerful and needing to be appeased.

When we marry, or move in, who is it we marry? Our mother? How is it that we are so slow to see that women, too are wrong. Steve Biddulph says

Though it may surprise many male readers to know it, women are only human. This means they are sometimes dead right and sometimes completely wrong. Most men are caught up thinking women are either devils or saints and miss this simple point. Women are normal fallible human beings.

He goes on to say that sometimes they are just different. (This is from his book Manhood. It can also be read on the Manhood Website under Standing up to your wife.)

The reason we think they are devils or saints, as he puts it, is because we are still relating to the Mother, who was a devil, or a saint, and was ALWAYS right, during our formative days. If we are ever to relate well to women, we have to get rid of the mother memories and relate to our partners as simple human beings, not mother underneath.

I am finding it a large task. I find however, that mere recognition of what I have outlined above has made for a better relationship with my wife. It's also changing my relationship with Mum, although I'm not able yet to analyse just how.

I say on this site

This reflects the mother memory all we men carry. It is, of course, exacerbated by the media emphasis on dumb men, and 'mere males' and by women themselves. At one level many are frustrated by the emotional castration many of us men underwent as children, and of which often we remain unaware. At another level I think there is good old sexism— it suits many women to be able to write men off as dopes.

Unfortunately for us all, unless we're gay or lesbian, it really is a case of 'can't live with them, can't live with out them.' We have to work it out— who is it we're living with? It's hard enough to live with a woman, let alone having our mum in bed with us too!