Little information on Elizabeth's childhood and education has survived.

On 17 May 1886 she sailed with her parents and her brother Thomas to England. They left from Largs Bay at eight in the evening bound for Plymouth aboard the R.M.S. Chimborazo. A diary kept by Thomas noted the ship's arrival at Naples on 19 June. The family was due to disembark at Plymouth on either 27 or 28 June. The family spent almost four months in England; they commenced their return journey from Plymouth on 16 October aboard the R.M.S. Lusitania.

Both the vessels in which they sailed were 3800 tonners, undoubtedly much more comfortable and spacious than that on which Jonathan and his parents had travelled almost 40 years earlier.

At the time of the family's trip, William, Elizabeth's younger brother, was attending school in England- no doubt his presence there provided the motivation for the long voyage across the seas. 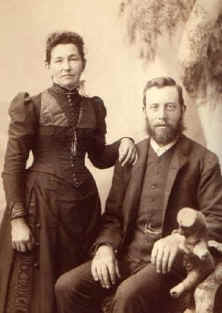 Elizabeth married Rev. Thomas Flood. a Methodist minister. The marriage was solemnized at the family home at Gladstone. Thomas had been friendly with Elizabeth's brother in England and, after serving in four circuits in his own country, he migrated to South Australia in 1888. Following brief service in Broken Hill, Thomas spent 1889 in Carrieton before taking up a two year appointment to Gladstone. it was during this time that he married Elizabeth. It is quite possible that he and Elizabeth had already met when Elizabeth had visited England some years before.

Other circuits in which the couple served were Quorn, Kooringa, Crystal Brook. Port Lincoln, Wilmington and Koolunga. For a time they lived in the home that Jonathan had built in Laura. This home became the Methodist manse and was used as such until 1980 when a new manse was built.

Elizabeth and Thomas retired to Sefton Park and every year they would come to Gladstone to spend some time with Elizabeth's brother.

Although retired, Thomas occasionally took church services and it was at one of these in August 1929 that he collapsed and died as he was entering the pulpit of the Enfield Methodist Church.

During her widowhood Elizabeth was a frequent visitor to the Gladstone farm and her brother Thomas often went to Adelaide to stay with her.

The family knew her as "Auntie Flood".