Saddle height is important. If the saddle is too high, you will rock across the saddle as you pedal. The friction leads to chafing and sores. Too low, and you lose mechanical advantage as you pedal, and, I feel, put extra stress on the knees.

Saddle Placement
Begin to set your height by being able to have your cleated foot flat at the bottom of the pedal stroke, with the leg just slightly bent at the knee. You should be able to lock the knee by dropping your heel below level. If it locks before then you will almost certainly be rocking across the saddle. Get your LBS (local bike shop) person to watch you from behind. If they don't know what you are talking about, go somewhere else.

Tip: It takes some experimentation to find the ideal height. When you get there, mark it with texta on the seat post, and measure it from the top tube. Bike mechanics will often shift the saddle to assist in hanging a bike, and sometimes forget to measure the position before they do.

Saddles also slide fore and aft. Again, experimentation is required. Get your experienced LBS person to roughly set you up by eye as they watch you ride. 5mm up or down, and backwards or forwards, can make a world of difference to comfort. Tip: mark your ideal fore and aft position with texta or similar.

Begin with the saddle dead level across the top. When it slopes down, it will add pressure to your hands, wrists and shoulders. If the nose slopes up, it will put pressure in the perineal region, and can cause a fair bit of pain, and exacerbate saddle sores. You'll find what works. 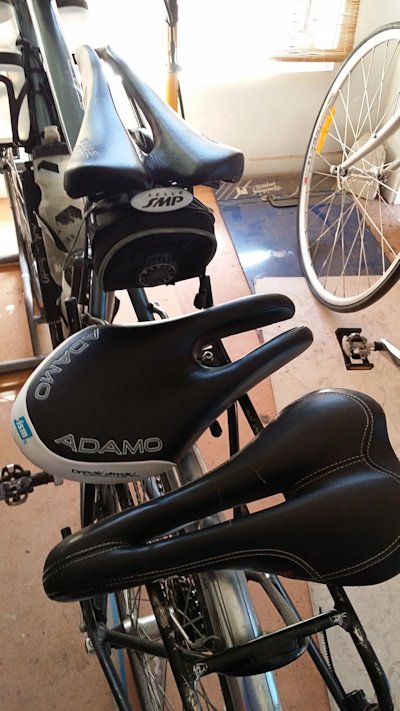 Any good bike shop should have a pressure sensitive seat to measure the width of your "sit bones."  The sit bones dictate ideal saddle size. Then there is the issue of cut outs in the saddle to reduce perineal pressure. The issue of men's fertility etc. is probably overstated by saddle manufacturers, but the comfort issues are obvious, especially to anyone who's had prostatitis.  Women have their own set of issues outside my remit, and there are woman specific saddles.

I went from a standard Tioga saddle to Adamo ISM to Selle SMP over a period of some 20,000km. The latter two saddles are not cheap, and any good bike shop should let you trial a saddle for a couple of weeks at least. Get in some long miles while testing. I used my first Adamo for commuting my 30 km in and out for a week or two and thought it was fine. As soon as I did over 30km non-stop I found it was too narrow and caused aching.  Gavin at Avantiplus Salisbury swapped it for a wider model, which did the trick.

The Adamo has no perineal pressure at all. It was brilliant for coming back from a bout of prostatitis that had left me wondering if I could ever ride again.  But this saddle puts more pressure back on the sit bones and I found that over 100km a day, on multi day trips, I would get sores. Hence the change to the exaggerated cut out of the Selle, which still has some forward support.

Knicks.
Get some. The chamois gives amazing protection to the backside. Get them tight. I wear medium knicks that feel over tight as you put them on. Loose, or relaxed fit knicks, move. Movement equals friction, which eventually equals saddle sores.

Always take spare knicks when touring. This is not about hygiene (see below.) If you take a fall, knicks can tear pretty easily, and torn in the wrong place can begin to rub badly.

Don't wear underwear. The seams add pressure points and friction points. The chamois is your underwear. My sense is that this is more important as we get older. I used to wear undies back when I was a teenager, and never had saddle sores. Older, thinner skin is less resilient.

Chamois
Quality varies enormously. You have to experiment. We tend to be idiosyncratic about these things. I currently use the lower quality Volta knicks because of their smooth chamois; the better quality ones designed for high end users seem to cause sore spots. Again-- what works for one person may not work for us!

There's an old saying: if you find knicks and a chamois that works, go back and buy five more. Manufacturers change designs with the wind, especially at the cheaper end.

Chamois Cream
When people make pronouncements about the need or otherwise for chamois cream, ask how far they ride, and how often. A twice weekly ride up to the bollards has no comparison to 100km+ per day for a month.

Lots of folk use Aussie Butt Cream, which is cheap, and sold everywhere in urban centres. Outside the cities and main regional centres, chamois cream does not exist. Long trips need a supply for the full trip, or else you will need to use Vaseline. That said, in 2016 I rode over 6500km on just one tube!

Lots of folk warn about Vaseline blocking the pores and causing sores, and how you will never get it out of your knicks. Back in the days of real leather chamois, Vaseline was all I knew about. I rubbed raw on a tough trip in 2014 and Vaseline was what finally let things heal up. The main problem with Vaseline is the mess you will make on café chairs; it doesn't just wipe off. There's hell to pay if you sit on fabric chairs! That's the only reason I stopped using it once the sore area finally healed up. It's way cheaper, still the best, you can buy it everywhere, and it takes up less room to carry. It does wash out of knicks over a few gentle washes. I leave a small jar in my bke bag, just in case.

Sores
There are two kinds of riding sore. One is the golf ball sized, pus seeping lump you should already have taken to your doctor. And then there is everything else, which is what this post is about.

Soreness comes from the pressure of long periods sitting on a bike seat, and / or from the chafing between us and our clothes, and the seat. It can range from pimples, lumps and bumps, to raw flesh.

Much of what applies to minimising riding sores, and riding with / through them, also assists with stress on other parts of the body. But sores and chafing deserve their own special place for the pain they can cause.

When dealing with sores make sure you have the basics of bike and saddle fit and knicks in place. If this is not under control then getting over sores will always be harder, if not impossible.

Secondly, consider carefully whose advice you are taking. What does a 25 year old who rides 30km a week to a coffee shop have to say to a person in their fifties who is trying to ride to Melbourne. Age affects skin resilience. Distance and frequency of riding massively affect the pressure placed on the butt.

Cleanliness
One of the frequent comments you will find on the internet is that cleanliness is all. This comes from the American cleanliness fetish fostered by their soap manufacturers, and a fundamental confusion between reducing the presence of harmful bacteria, (good) and removing all bacteria (impossible).  Especially prevalent is the fear of smelling. So we get pages devoted to the premise that spending more than two minutes in your knicks without showering and sterilising your backside will cause an instant outbreak of life threatening carbuncles or other sores.

This is basic nonsense and, for a touring cyclist, simply not feasible anyway. Over-soaping damages skin. We are better to wash briefly with water- when we can- and let the ecosystem of the backside develop and look after itself. On  a desert tour I rode 5, 7, and 5 days without showers of any kind. I used the same pair of knicks throughout, taking them off at night and hanging them in the tent. A bit of attention under  the arms and in the pubic hair with Muc-Off, or even just clean water, is all that is needed.

When riding, I use Aussie Butt Creme sparingly. Too much will make the backside wet and increase friction. (This was a painful lesson for me.) I also apply some sparingly at the end of the day. If I have more than minor sore patches, then  I apply some Sudocreme.

If I have had raw patches, bumps, or sores, I wash clean (briefly) with water, if I can, and apply a bit of Betadene. Off the bike, I wear loose briefs, not jocks. I've never had anything get infected using this approach. This includes riding for several weeks with an open sore which slowly healed over. In the short days of winter, this includes tenting up, cooking and getting into the tent before dark (or before the mozzies are too bad) and only then getting out of the knicks and washing and cleaning up.)

Pain
In the end, if everything is properly fitted, the only answer seems to be more riding. The skin simply gets used to the pressure and toughens up. On my last trip I needed Sudocreme for about a week, and then everything settled down. The big problem is how to deal with the pain which may be present first thing in the morning when we start riding, or after stops on the road.

If I am early in a trip where pain is a problem, I start the ride a couple of gears too high so I can stand on the pedals and get the bike coasting. While coasting I introduce my backside to the idea that it will need to sit down. I find that in a kilometre or two, that initial pain disappears. Short breaks for lunch also help, as the backside doesn't get to the "Oh, shit! Not more!?" stage.

I have used Ibuprofen taken about 45 minutes before a ride to ease the discomfort as the blood starts to flow in the nether regions at the beginning of the day, but this was only when I had actual raw areas. Don't overdose; I am told it really is bad for you!