The Tour Down Under Community Ride for 2020 was 162 kilometres beginning in Norwood and finishing in Murray Bridge.  This was an excellent distance for practising slow riding techniques for Deborah, especially since we planned to ride back to Norwood, which raised her total to 242km for the day. 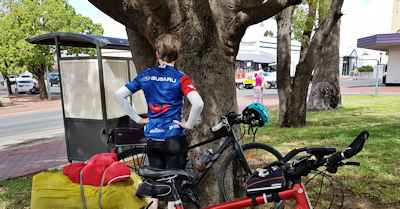 The goal with this sort of riding is not to finish in the least amount of time, but to be able to travel considerable distance and then be in good enough condition to do it all again tomorrow.  This particular trip included multiple climbs across the Adelaide Hills and then a long run down into Mannum and then onto Murray Bridge. It also required climbing back trhough the hills, at night, and into a forecast headwind.

The trip was four months, almost to the day, since Deborah purchased her bike, so it was a considerable challenge. It was good practice for me, and evidence of just how incredibly efficient a bicycle is. I was most of the way through a course of antibiotics of the kind where the doctor has to ring Canberra to get a magic number and then sacrifice a kitten to fill out the prescription. Then your hair falls out— I had felt very ordinary earlier in the week, but using the slow riding technique I was teaching Deborah, managed the distance very well.

We arrived in Murray Bridge with a road speed of about 19.5kph, which is good touring speed on any day. This dropped back to 17.8 by the time we reached Adelaide— no surprises there— and after another 50km home (I climbed back up to Upper Hermitage) I had completed 292km at 17.6km.

The key incident of the trip was for Deborah to nod with appreciation as a car passed her with plenty of room (1.5metres plus) and then watch with horror as it drove into me with the old mirror clip pass.  Here is the thing, people: If you look back at the cyclist you have just passed, you are likely to run over the one in front.  I think it is fair to say it's not a mistake the driver will make again. An incandescent cyclist is a very scary animal indeed.

Deborah concluded that, overall, truck drivers are much more polite and aware of cyclists than car drivers. This is also my general experience. 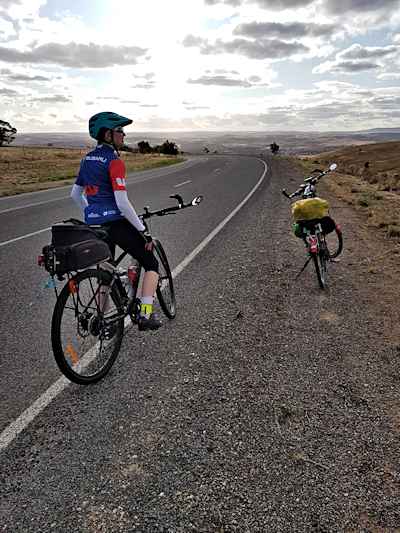 Sitting above Callington on the way back to Adelaide