Paul an apostle—sent neither by human commission nor from human authorities, but through Jesus Christ and God the Father, who raised him from the dead— 2and all the members of God’s family who are with me,

To the churches of Galatia:

3 Grace to you and peace from God our Father and the Lord Jesus Christ, 4who gave himself for our sins to set us free from the present evil age, according to the will of our God and Father, 5to whom be the glory for ever and ever. Amen.

6 I am astonished that you are so quickly deserting the one who called you in the grace of Christ and are turning to a different gospel— 7not that there is another gospel, but there are some who are confusing you and want to pervert the gospel of Christ. 8But even if we or an angel from heaven should proclaim to you a gospel contrary to what we proclaimed to you, let that one be accursed! 9As we have said before, so now I repeat, if anyone proclaims to you a gospel contrary to what you received, let that one be accursed!

10 Am I now seeking human approval, or God’s approval? Or am I trying to please people? If I were still pleasing people, I would not be a servant of Christ.

11 For I want you to know, brothers and sisters, that the gospel that was proclaimed by me is not of human origin; 12for I did not receive it from a human source, nor was I taught it, but I received it through a revelation of Jesus Christ.

I'm not sure that Paul the Apostle and I would get on. When I read the seven letters that people are pretty much agreed Paul himself wrote, I meet an abrupt and driven personality. He is angry, he is blunt like the thick end of an axe; the violence that drove this man to persecute Christians, and to approve the mob killing of Stephen (Acts 7:54-60) is... still there. Like us, he is still being converted!

In his letter to the Galatians there is a verse about people who believed that to be a true Christian, you had to be circumcised. Referring to this, Paul says—about them—"I wish those who unsettle you would castrate themselves!" Or as the Jerusalem Bible puts it; "Tell those who are bothering you I would like to see the knife slip." (5:12) (Perhaps I recognise something of myself in him.)

On the other hand, this man who "was ravaging the church by entering house after house dragging off both men and women" and committing them "them to prison," and who was "breathing threats and murder against the disciples of the Lord," (Acts 8:3, 9:1)  met God in such a life changing way that it temporarily blinded him. It turned his life around, and he spent the rest of it propagating the same faith he had tried to wipe out. In Acts 25 Paul is before King Agrippa, who had the power of life and death over him really, and what does he do? Does he beg for mercy? No—he tries to convert the bloke!

I would really like to meet the God who does that to a person!

The problem is that Paul lived 20 centuries ago. He spoke Greek—with a Jewish accent—and he did not leave me a book called Paul's Manual for meeting God. All I have—all we have—is some letters he wrote to churches. It's like listening to a friend on the phone when we read these letters; we only get one side of the conversation. When Wendy is on the phone I can sometimes work out who it is, and what they are talking about. Other times I get it all ridiculously wrong.

What I can hear during those conversations, is what Wendy is like. I may not quite know what issue she is addressing with the other person, but I can hear what Wendy believes about things.

It's clear that things are not going well in Galatia. Someone is suggesting that when Paul came, he was not preaching the true Gospel of Jesus at all! Paul is not happy. If you read the bible study this week you will see how the letter he has written is terse and angry; you may not need the study, either. It's fairly obvious in the English translations!

But look at the Greeting. It talks about God.

Grace to you and peace from God our Father,  and [from] the Lord Jesus Christ  who gave himself for our sins to set us free from the present evil age, according to the will of our God and Father, 5to whom be the glory for ever and ever. Amen. (1:3,4)

The idea of God talking to people in Paul's culture, was a bit like a visit from the police. It's almost never good news when the figures in authority take notice of the little folk like you and me, and come to  visit. We are not silly to feel apprehensive.

All my goodness I give to you, and may it be that you and all people have the best and fullest life possible, says God.

God is on our side! This is the good news.

God our Father and the Lord Jesus Christ are not just religious words. The Emperor Domitian referred to himself as Lord and God. The Romans believed—or said they did, for political purposes, that their Emperors were divine. The Emporer Valerian included in all his titles one that said, Father of the Fatherland. And to call someone... The Lord was to imply allegiance. At the root of this verse is the claim that our final allegiance as Christians is to God, not to the state.

I don't think anyone here would disagree... except... there was a colleague who led Bible studies where people strongly agreed that justice was paramount, mercy and compassion were fundamental, and 'putting your money where your mouth was' and doing something concrete, was essential for true Christianity. But when the colleague suggested they get involved in protesting Australia's appalling; inhumane, and decidedly unChristian treatment of refugees, they refused.

It was a safe Liberal Party seat, and someone said to me when I was a visiting preacher in that parish, "Mr. Howard is a good man and doing a good job! You shouldn't criticise him." I am grieved to say this, but for those folk, on that issue, their final allegiance was not to God, but to the government of Australia! And I wonder whether I would 'cave in' if the government required me to do something contrary to the teaching of Jesus.

We face a fearful paradox.

There is the God who graces us and wishes us shalom (peace). All my goodness I give to you, and may it be that you and all people have the best and fullest life possible, says God.

And that goodness of God, we know, includes forgiveness of our shortcomings. It is truly grace-full.

But the way Paul talks about this God implies that God asks for our complete and utter allegiance to God our Father and the Lord Jesus Christ. In fact Paul refers to himself as a slave of Christ. (1:10) He expects us to follow him in this, and for good reason. In Philippians 4:9 he says, "Keep on doing the things that you have learned and received and heard and seen in me, and the God of peace will be with you."

To teach other than this gospel and this allegiance, is to invite a great and serious cursing. So... what if we live other than according to the gospel. What if despite all our fine words, our real allegiance is to Mr Howard, or Ms Gillard?

We don't like the idea of cursing. It implies the kind of God who we know is not worthy of being called a God of Love, nor of being worshipped. But Paul clearly understood that allegiance to the wrong thing had life shattering consequences.

Perhaps we can take from this letter of Paul, so far, that we are dealing with 'ultimate issues.' We should not take lightly our relationship with this God. God, claims Paul, sets us free from this evil age; God frees us from all ills in this world and the next, as the hymn said.

Are we taking this seriously? Are we really paying attention to what this loving God offers us, or are we playing around the edges of the faith, while our real allegiance lies elsewhere? 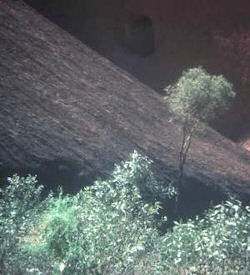