There is a constant battle going on in our house; there are our cats and Jo’s cats. Each one wants to be Top Cat. They all think they are better than the dog, but most of them are a little bit scared of the dog.

The Dog knows it is better than the cats—it’s a person, after all—but is a little scared of a couple of the cats. So we have some battles royal, especially if a cat goes near the dog’s food bowl.

But each one of these animals loves to be loved. It’s not just cupboard love; even after feeding they smooch up to the house people. The kittens lie down together, or play. Dancer, the Corgi, used to wash the black cat all over. She tries to play with the current dog. It’s rather like AFL footballers and Ethiopian soccer players trying to play lacrosse without a rule book; no one quite knows what is going on, but  even for animals, being together in relationship is a part of what makes them who they are.

No doubt there was good luck involved, but if it was not for their prowess at being animals, we wouldn’t be here. Being number one keeps you alive….

except… in our evolution of body and of faith, we have discovered that what really keeps us alive is relationship. Relationship takes us beyond mere animality toward something else.

The humans who have succeeded, and become human, are the ones who have cooperated in families, tribes and nations. And the apex of humanity, we have learned, is not where we operate on a “you scratch my back and I’ll scratch yours” basis, but where we live on the basis of mutual love and mutual respect. There is a fuller humanity which knows we must transcend the self interest of staying alive.

You don't need to be a Christian to know this. There is a sense in which we can say Jesus did not come offering new information to us! As he says to one person he met, who asked for advice, "...if you want to enter into life, keep the commandments." Matt 19:16 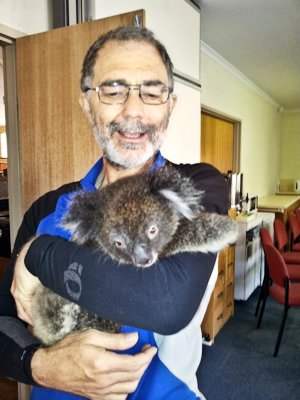 suddenly see that it, too, is part of earth. You could realise that there is no reason you should be more important than it is. Your whole life would change from being a live for myself to be number one and stay alive kind of homo sapiens to someone far more human; the kind of person who knows they are part of earth, dependent on earth, and seeing that to be human is to grow with earth, not to exploit it.  (Both kinds of people live in and outside the church.)

So I think our brother Bill Loader is correct. He says

Jesus was God’s envoy and ambassador. It was not that Jesus came offering new information. Rather his life is to be seen as an offer of relationship, a hand stretched out from God. [And the] essential ingredient [is this]: the relationship is not any kind of relationship; it is one characterised by love.

You see, I can hold that little fellow on Wednesday and be captivated by him and step into a new love for creation and for other people. But in a poetic way, we could say that Jesus is telling me that rather than me holding the koala, and becoming human, God is offering to hold me!

In Jesus,  God has come offering relationship, healing the broken, torn apart, solitary thing in us that’s always longing to be loved, and to be together , and to be held, but which is so afraid of losing itself, and not being in charge and being number one so that it ensures it can stay alive...

God meets us, and offers to live with us; even to hold us when we need it, and it’s here that we become human.

How does this work on the ground?  What is becoming so completely one, that the world knows that the Father has sent Jesus and that the Father loves us people just as he loves Jesus, his Son. What would that kind of 'being one' look like?

Well, you know that we can take out income protection. We pay an insurance policy so that if  we’re sick, given the right doctor’s certificates are signed, then the insurance company will pay us an income. It’s all done by letter and certificate, and we have something to live on if we are ill and have used up all our sick leave.

Now, I am part of one of these schemes. It’s called the Uniting Church Beneficiary Fund, and in the last few months, while I've been sick, it's been supporting me.

It’s different from an insurance company. The Uniting Church has its rules and its regulations, of course, but here is the difference: The Uniting Church person, Sharonne, said to me, “Look, just stop working, just keep yourself alive, we’ll look after you.”

And all the way through— along with Doctor’s certificates—Sharonne and others have met with met me to look after me. They’ve had coffee with me, and paid for the coffee, what’s more; offered to take me out to meals; listened for hours—is there anything we can do, they ask?

They’ve subsidized my health care, talking with counselors to get through all the trauma—so much more than an insurance company. This is part of the oneness that John talks about. It is a oneness that is about helping, and healing, and being friends. It is about learning from each other, and respecting each other, far beyond mere cooperation, or a commercial relationship.

This is what we long for as human beings. It is what makes us more human. It heals our fundamental selves.

Now, the Uniting Church has had some massive fails in the way that it does stuff, and in the way we look after people; I’ve been on the end of that, too. And I've been very critical of us. But when our love works, it is spectacular. People are stunned, and amazed, and healed.

You see, in this strange mix that is me there are two forces acting in me and upon me.

One is the experience of separation. I am separated from other people, I am alone… and it hurts, and I want to be together with people.  I want to be love and be loved.  I don’t want to be ruled and controlled; not the sort of fake unity where we all agree because someone has got an iron fist. I want to be loved just for me; to be held; to be safe like I was with my mum and my dad, when I was a little kid.

I think that’s a universal human experience. We are fundamentally alone, and wish that we were not. We wish someone would love us and look after us, even if we think we know it can never happen.

The other force which pushes me, is that I want to be me. I know that I am me. I am separate. And I am afraid; I am deeply afraid of losing me. If I get too close to you, and become too much your friend, I might begin to disappear—I might lose my self—and I’m afraid of that.

Now I know there are relationships which are abusive and which would make me less than a person; I’m not talking about that; I’m talking about even when I am with the people who are my very best friends, and who’ve loved me to bits. I’m scared of them at a very deep level, because I want to be me.

It is also universal that much of our fear in the world is about losing our self.

The problem is that I’m running out of time. I’m dying; like all of us. And at some point I’m not going to have any choice about being separate, or being me, or not. I’m going to be taken apart and become one with the world whether I want it or not. Because I; me; this thing I call me, is not going to be here any longer. It’s going to die. I’ve got to let go of it. This is why dying is so frightening, I think. It’s not the pain; it’s what might happen to me.

It’s alright going to have a root canal at the dentist, where you think, “Well, I just hang in there; it’ll be over soon. “ When we die it’s not over—or rather, it's really over, and we don’t come back like we come back from the dentist. It is a fearful thing.

What the Christian Faith is trying to teach us is that this dying is actually relationship with God. Dying is finally being together with God, in some way that we don’t quite understand.

And what God and Jesus are saying in John is, “Look, you don’t have to hang around waiting for this for sixty or seventy years, in a state of fear and of terror. The relationship is here to be had now; with us now. And you can begin tasting and experiencing that relationship in your relationships with each other;  you can become one.”

As one writer says, you can choose already how you are dying; to whom and to what you are giving yourself, and this is a stunningly freeing thing. (Richard Beck)

My best analogy of this is going to the beach. I used to swim each day. Part of this was not about exercise; it was a spiritual discipline to face my fears, because I am afraid of water.

One day, even though it was a calm day at home, 3 miles from the beach, there was a huge swell; the were waves three and four metres high. It was no weather for swimming along the beach. But I noticed some little kids out in the waves, on surf mats, and I thought surely if they can do it, I can go out there. And so I did. It was hard getting out there, but once I was out there, I felt the most amazing joy and safety. There I was in the arms of the water, up and down, bobbing on the waves.  It was wonderful; strangely quiet and peaceful!

What John is trying to say to us is if you can wade into the water; if you folk can embrace each other and be one together, then you’ll have this experience where you discover that the thing you long for and the thing feared so much, is even better than you imagined.

In that I think there is an uncommonly attractive love. We’re a small group; we wonder about our future, and yet when you show that kind love, I’ve got a feeling that we don’t really have to worry about our future. Our problem is going to be how we look after the people who come!