Remember that before this week's reading in chapter 6, Jesus

went about among the villages teaching. 7He called the twelve and began to send them out two by two, and gave them authority over the unclean spirits. ... 12So they went out and proclaimed that all should repent. 13They cast out many demons, and anointed with oil many who were sick and cured them.

This text is followed by The Feast of the Oppression, where John the Baptist, who also taught repentance (turning again to the ways of God), is murdered. Then the lectionary for this week begins

30The apostles gathered around Jesus, and told him all that they had done and taught. 31He said to them, ‘Come away to a deserted place all by yourselves and rest a while.' For many were coming and going, and they had no leisure even to eat. 32And they went away in the boat to a deserted place by themselves. 33Now many saw them going and recognized them, and they hurried there on foot from all the towns and arrived ahead of them. 34As he went ashore, he saw a great crowd; and he had compassion for them, because they were like sheep without a shepherd; and he began to teach them many things.

The lectionary leaves out the first of Jesus' feasts, and the story of walking on the lake. They are dealt with in next week's reading, taken from John. Although John emphasizes Jesus' majesty and power even more than Mark, this approach destroys the flow of the drama in Mark. We return to the story in Mark 6:53

When they had crossed over, they came to land at Gennesaret and moored the boat. 54When they got out of the boat, people at once recognized him, 55and rushed about that whole region and began to bring the sick on mats to wherever they heard he was. 56And wherever he went, into villages or cities or farms, they laid the sick in the market-places, and begged him that they might touch even the fringe of his cloak; and all who touched it were healed.

One observation about the cycle of the Three Feasts is that Herod's feast is a response to Jesus' healings. Obviously, this is not an historical cause and effect relationship, but the flow of Mark's drama is intriguing. In the flow of the drama, starting in Mark 6:6, the Three Feasts are surrounded, and punctuated, by Jesus and the disciples travelling, healing and teaching.

As he went ashore, he saw a great crowd; and he had compassion for them, because they were like sheep without a shepherd; and he began to teach them many things. (6:34)

I once saw a lone dog herding sheep. Strayed from its owner, it was doing what sheepdogs do, herding sheep. But without the farmer present, there was no concern for the sheep. The dog just herded according to its own instincts. The dog may not even have belonged to the farm.

Eventually these sheep would collapse with exhaustion, or fear, driven by a force that was operating outside any authority given to it. The dog's ceaseless wheeling round the mob, harrying them erratically around the paddock, is a picture of undirected life. In such a life, we are harried, directionless, at the mercy of outside forces. It is also a picture of life in an unjust society, where the sheep are mercilessly driven by forces that wish only to use the sheep for their own purpose. There is no regard for those who cannot keep up. Indeed, just as the dog snarled at those sheep who were flagging as it wheeled them, so the unjust extort even more from the poorest.

Farmers shoot dogs that go herding on their own, without authority. They know it is a short step to savaging of the sheep.

Moses spoke to the Lord, saying, 16‘Let the Lord, the God of the spirits of all flesh, appoint someone over the congregation 17who shall go out before them and come in before them, who shall lead them out and bring them in, so that the congregation of the Lord may not be like sheep without a shepherd.' 18So the Lord said to Moses, ‘Take Joshua son of Nun, a man in whom is the spirit, and lay your hand upon him; 19have him stand before Eleazar the priest and all the congregation, and commission him in their sight.

The shepherd is the one who looks after the people. The first shepherd is Joshua, which in Hebrew, is Jesus. The shepherd is an important political image in the tradition of Jesus people. It is extensively developed in Ezekiel 34

The word of the Lord came to me: 2Mortal, prophesy against the shepherds of Israel: prophesy, and say to them-to the shepherds: Thus says the Lord God: Ah, you shepherds of Israel who have been feeding yourselves! Should not shepherds feed the sheep? 3You eat the fat, you clothe yourselves with the wool, you slaughter the fatlings; but you do not feed the sheep. 4You have not strengthened the weak, you have not healed the sick, you have not bound up the injured, you have not brought back the strayed, you have not sought the lost, but with force and harshness you have ruled them. 5So they were scattered, because there was no shepherd; and scattered, they became food for all the wild animals. 6My sheep were scattered, they wandered over all the mountains and on every high hill; my sheep were scattered over all the face of the earth, with no one to search or seek for them.

(After this condemnation, Ezekiel looks forward to God's healing of the situation.)

9therefore, you shepherds, hear the word of the Lord: 10Thus says the Lord God, I am against the shepherds; and I will demand my sheep at their hand, and put a stop to their feeding the sheep; no longer shall the shepherds feed themselves. I will rescue my sheep from their mouths, so that they may not be food for them.

11For thus says the Lord God: I myself will search for my sheep, and will seek them out. 12As shepherds seek out their flocks when they are among their scattered sheep, so I will seek out my sheep. I will rescue them from all the places to which they have been scattered on a day of clouds and thick darkness. 13I will bring them out from the peoples and gather them from the countries, and will bring them into their own land; and I will feed them on the mountains of Israel, by the watercourses, and in all the inhabited parts of the land. 14I will feed them with good pasture, and the mountain heights of Israel shall be their pasture; there they shall lie down in good grazing land, and they shall feed on rich pasture on the mountains of Israel. 15I myself will be the shepherd of my sheep, and I will make them lie down, says the Lord God. 16I will seek the lost, and I will bring back the strayed, and I will bind up the injured, and I will strengthen the weak, but the fat and the strong I will destroy. I will feed them with justice.

The image of the shepherd is profoundly political. Jesus' actions in this week's lectionary, and in the whole of Mark 6, are a political statement. There is no piety separated from political purpose here. Indeed, notice verse 34 again

As he went ashore, he saw a great crowd; and he had compassion for them, because they were like sheep without a shepherd; and he began to teach them many things.

The first thing he does is teach, not heal. Teaching is about empowerment. It is not mere charity. Long before Paulo Freire, we have here a Pedagogy of the Oppressed. It follows immediately after the Feast of the Oppression, which has destroyed John the Baptist, who was preaching against Herod, one of the shepherds of Ezekiel 34.

Dom Helder Camara said, "When I give food to the poor, they call me a saint. When I ask why the poor have no food, they call me a communist." Immediately after teaching the people, Jesus feeds them. We are called to follow Camara's example.

They were laying the "weak"--asthenountas--in the "marketplaces." Asthenountas may mean "sick," but, more broadly, means "enfeebled,""weak," or"lacking energy." These "weak ones"--on pallets, incidentally, which were used by the poor--were laid in the most public place in any town or city, the "marketplace." The "marketplace" is alsoa major local outpostof the established economic system.The "weak" are brought there, butthey are healed by Jesus, not by the economic status quo. 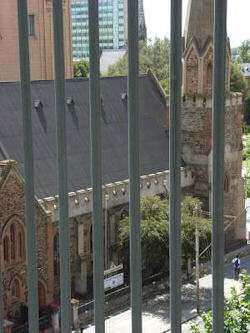