10 When he was alone, those who were around him along with the twelve asked him about the parables. 11And he said to them, ‘To you has been given the secret* of the kingdom of God, but for those outside, everything comes in parables; 12in order that
“they may indeed look, but not perceive,
and may indeed listen, but not understand;
so that they may not turn again and be forgiven.” ’  …

26 He also said, ‘The kingdom of God is as if someone would scatter seed on the ground, 27and would sleep and rise night and day, and the seed would sprout and grow, he does not know how. 28The earth produces of itself, first the stalk, then the head, then the full grain in the head. 29But when the grain is ripe, at once he goes in with his sickle, because the harvest has come.’

30 He also said, ‘With what can we compare the kingdom of God, or what parable will we use for it? 31It is like a mustard seed, which, when sown upon the ground, is the smallest of all the seeds on earth; 32yet when it is sown it grows up and becomes the greatest of all shrubs, and puts forth large branches, so that the birds of the air can make nests in its shade.’

33 With many such parables he spoke the word to them, as they were able to hear it; 34he did not speak to them except in parables, but he explained everything in private to his disciples. 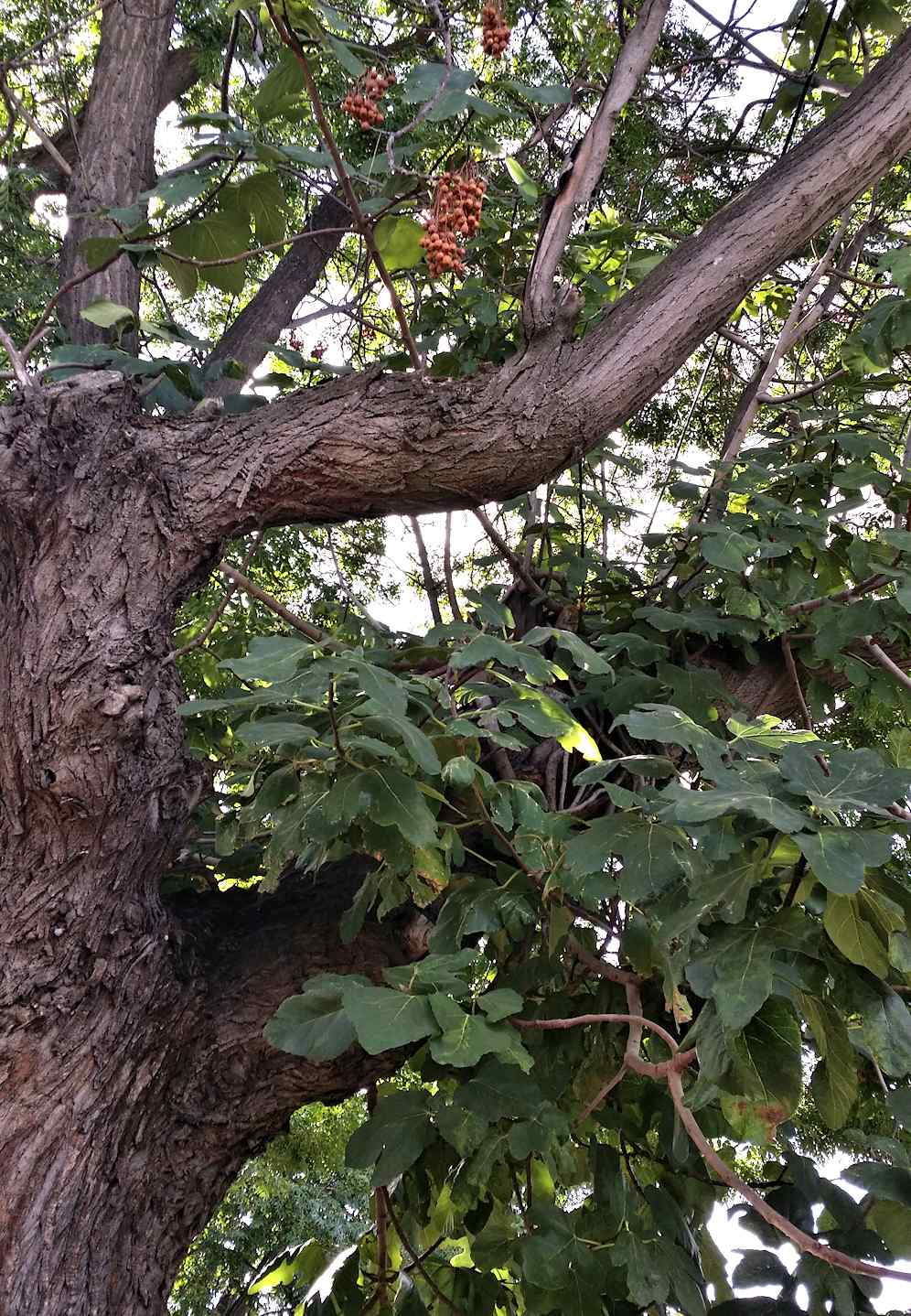 This tree provided me with some seconds of confusion. It's a White Cedar, like all the other trees on that street. But the great profusion of leaves are of a Mediterranean Fig. It stands in the street behind the church and, one day, I hope to pick a fig from a cedar tree. For the Community of Divine Love we often call the Kingdom of God is like a fig which grows in a white cedar.

How does a fig seed get its roots into a cedar and flourish through the long summer of Adelaide? It's a parasite disrupting and feeding off the neat suburban vision of the local council. It is helplessly complicit in the vision— such as it is— of the surrounding culture. And it is so vulnerable. Who knows if the council gardeners will smile at it with indulgence, or slice it out with a chainsaw? But the fruit is large and rich, entirely different to the hard berries of a white cedar. It is a fig, not a cedar.

This is the Community of God: the seed sprouts and we do not know how, (Mark 4:27) but we eat while we may. And what we see growing will depend upon us. How many people have travelled down Barwell Terrace and never noticed what is growing in plain view? How many have wondered a moment at the oddity, and walked on? Will someone be scandalised  by a fig tree out of place, and driven to destroy it— that happens to little outbreaks of Kingdom. Who will see the rich delight of figs, and take and eat of the gifts of God? The fig tree reads us.

The fig tree is a parable waiting, a word spoken as we are able to hear it. (Mark 4:33) It is the public secret of the Kingdom of God, confounding our expectations, subverting what should be, and waiting in God's time for the moment when something germinates within us, and lets a new awareness send down roots into the cracks in our self, splitting further the pavement of our settled lives. And teaching us to read the language of trees, and creation, and kingdom, to discover an entirely new story!

Israel, meeting God, sensed it was chosen to fruit a new way of being a people in the world. In its pride, surrounded by empire, it failed, was uprooted, and brought low. Ezekiel saw an unlikely future, and trusted it.

I myself will take a sprig
from the lofty top of a cedar;
I will set it out.
I will break off a tender one
from the topmost of its young twigs;
I myself will plant it
on a high and lofty mountain.
23 On the mountain height of Israel
I will plant it,
in order that it may produce boughs and bear fruit,
and become a noble cedar.
Under it every kind of bird will live;
in the shade of its branches will nest
winged creatures of every kind.
24 All the trees of the field shall know
that I am the Lord.
I bring low the high tree,
I make high the low tree;
I dry up the green tree
and make the dry tree flourish.
I the Lord have spoken;
I will accomplish it.

What would this vison mean to Jesus' people, back home in the Promised Land, circled by empire centuries later, compromised by collaborators? What had happened to that new noble cedar? What shelter was there for birds in the poverty of Palestine? What good could come from Nazareth and Galilee?

Jesus saw an unlikely future and trusted it. Kingdom will grow like a weed, taking the place over. Much of the population will be un-noticing. Some will hate it and seek to eradicate it, but will fail, along with some millennia of the world's farmers, for mustard is mustard, and here to stay.

And the greatest of all the shrubs— what a dig at the curators of fine cedar!  — will not be measured by its stature, but by what it shelters. All the birds of the air will come and find shelter. All the odd, damaged, seeking, and despairing folk will find a place. And if government tidies the suburbs, and rips out the challenges to its pretentions and idolatry, well… mustard is mustard, and here to stay.

And for those with eyes to see, there will be a discovery. Those tiny mustard seeds of kingdom are the Tardis-fruit of love. They are rich figs, full of life and energy, transformers of the wounded and dispossessed. If you can see. If you really long for life. If you will listen.

Andrew Prior (2018)
Direct Biblical quotations in this page are taken from The New Revised Standard Version Bible, copyright 1989, Division of Christian Education of the National Council of the Churches of Christ in the United States of America. Used by permission. All rights reserved. Please note that references to Wikipedia and other websites are intended to provide extra information for folk who don't have easy access to commentaries or a library. Wikipedia is never more than an introductory tool, and certainly not the last word in matters biblical!

Things I read this week

In all my years of listening to Church Growth experts, I don’t recall a single one saying, “The Reign of God is something that you sow inadvertently and it grows while you are busy going about your business and, in fact, the whole harvest is simply a big surprise and a gift.” No, our agricultural metaphors for the Reign of God are of the deliberate, technique-driven sort. Mark D. Davis.

I remember a small book whose author, long forgotten, which suggested that growth is an accident; we don't know where it comes from. The question is whether we will foster it, or get in its way, or cut it down. I wondered, after reading Davis, what it is we are planting when we get really intentional about church growth.

In my comments on the Gospel, I present the Parable of the Mustard Seed as a joke, a joke that would be difficult to get without Ezekiel 17 in the background  … Is Jesus half-joking in using the image of a mustard bush to lampoon empire and sow seeds of hope for their small, persecuted community? A dominant image for me became people’s lives who feel like weeds in someone else’s garden …. most of us modern city dwellers don’t realize that this farmer is also sowing a weed into his garden (if we take Luke’s “garden” over Mark’s more vague “ground”). Now, if we’d change that to something like a man sowing dandelion seeds into his lawn, I think we’d finally realize that this is a joke.

Alongside this I place words from Melanie Homan.

I’ve often thought that dandelions are beautiful, and I don’t get why people try to get rid of them – they can make a field a sea of yellow. I think it’s beautiful! The same, apparently, goes for our backyard. The people who owned our home before us were avid gardeners. I can’t identify half of the plants in our yard, but they look nice and I leave them alone because I have entirely no idea what to do with them. One evening this summer we were out in our backyard, and our neighbor was in her backyard, too. We were visiting and, as we were talking, I commented on how beautiful the flowers were in our backyard and how much we were enjoying them. My neighbor said – “Those aren’t flowers. Those are weeds. They are invasive. If you don’t pull them they will take over your entire yard.” Oh. I sort of thought they were pretty! We then had to decide if we were going to enjoy our “pretty weeds” or pull them. We have the same sort of dilemma when it comes to the mustard seed. Depending on which gospel you read, the mustard seed either turns into a large bush or a tree – either way, a plant that is big enough for birds to rest in. But, depending on your perspective, a mustard bush is either a really useful plant - or it’s a noxious weed. There were rules about where you were allowed to plant mustard – and it was NOT supposed to be planted in gardens, because it was so prolific in growing. Year one you have one mustard plant. Year two you have several mustard plants. Year three – the entire garden has been taken over with mustard. If you are trying to grow other things, mustard plants would tend to be problematic.

Which raises for me the whole point of parables. "With many such parables he spoke the word to them, as they were able to hear it…" (Mark 4:34) Parables are "two edged" says James Alison. (Raising Abel pp83) There are a variety of interpretations possible. It seems to me that parables sit as pungent little stories— mustard again! — which defy neat interpretation. They niggle at us if we are open to being niggled. Or they let us settle and lay down footpaths and hard-pack to stop anything growing. Which is the same as hearing but not hearing. But they remain, like irritating weeds, still pushing up through our neat ordered suburbs, mustard and fig-tree, always offering a new vision. AP