Funerals in the face of death.

Now a certain man was ill, Lazarus of Bethany, the village of Mary and her sister Martha. 2Mary was the one who anointed the Lord with perfume and wiped his feet with her hair; her brother Lazarus was ill. 3So the sisters sent a message to Jesus, ‘Lord, he whom you love is ill.’ 4But when Jesus heard it, he said, ‘This illness does not lead to death; rather it is for God’s glory, so that the Son of God may be glorified through it.’ 5Accordingly, though Jesus loved Martha and her sister and Lazarus, 6after having heard that Lazarus was ill, he stayed two days longer in the place where he was.

7 Then after this he said to the disciples, ‘Let us go to Judea again.’ 8The disciples said to him, ‘Rabbi, the Jews were just now trying to stone you, and are you going there again?’ 9Jesus answered, ‘Are there not twelve hours of daylight? Those who walk during the day do not stumble, because they see the light of this world. 10But those who walk at night stumble, because the light is not in them.’ 11After saying this, he told them, ‘Our friend Lazarus has fallen asleep, but I am going there to awaken him.’ 12The disciples said to him, ‘Lord, if he has fallen asleep, he will be all right.’ 13Jesus, however, had been speaking about his death, but they thought that he was referring merely to sleep. 14Then Jesus told them plainly, ‘Lazarus is dead. 15For your sake I am glad I was not there, so that you may believe. But let us go to him.’ 16Thomas, who was called the Twin, said to his fellow-disciples, ‘Let us also go, that we may die with him.’

17 When Jesus arrived, he found that Lazarus had already been in the tomb for four days. 18Now Bethany was near Jerusalem, some two miles away, 19and many of the Jews had come to Martha and Mary to console them about their brother. 20When Martha heard that Jesus was coming, she went and met him, while Mary stayed at home. 21Martha said to Jesus, ‘Lord, if you had been here, my brother would not have died. 22But even now I know that God will give you whatever you ask of him.’ 23Jesus said to her, ‘Your brother will rise again.’ 24Martha said to him, ‘I know that he will rise again in the resurrection on the last day.’ 25Jesus said to her, ‘I am the resurrection and the life. Those who believe in me, even though they die, will live, 26and everyone who lives and believes in me will never die. Do you believe this?’ 27She said to him, ‘Yes, Lord, I believe that you are the Messiah, the Son of God, the one coming into the world.’

28 When she had said this, she went back and called her sister Mary, and told her privately, ‘The Teacher is here and is calling for you.’ 29And when she heard it, she got up quickly and went to him. 30Now Jesus had not yet come to the village, but was still at the place where Martha had met him. 31The Jews who were with her in the house, consoling her, saw Mary get up quickly and go out. They followed her because they thought that she was going to the tomb to weep there. 32When Mary came where Jesus was and saw him, she knelt at his feet and said to him, ‘Lord, if you had been here, my brother would not have died.’ 33When Jesus saw her weeping, and the Jews who came with her also weeping, he was greatly disturbed in spirit and deeply moved. 34He said, ‘Where have you laid him?’ They said to him, ‘Lord, come and see.’ 35Jesus began to weep.36So the Jews said, ‘See how he loved him!’ 37But some of them said, ‘Could not he who opened the eyes of the blind man have kept this man from dying?’

38 Then Jesus, again greatly disturbed, came to the tomb. It was a cave, and a stone was lying against it. 39Jesus said, ‘Take away the stone.’ Martha, the sister of the dead man, said to him, ‘Lord, already there is a stench because he has been dead for four days.’ 40Jesus said to her, ‘Did I not tell you that if you believed, you would see the glory of God?’ 41So they took away the stone. And Jesus looked upwards and said, ‘Father, I thank you for having heard me. 42I knew that you always hear me, but I have said this for the sake of the crowd standing here, so that they may believe that you sent me.’ 43When he had said this, he cried with a loud voice, ‘Lazarus, come out!’ 44The dead man came out, his hands and feet bound with strips of cloth, and his face wrapped in a cloth. Jesus said to them, ‘Unbind him, and let him go.’

Funerals in the face of death. 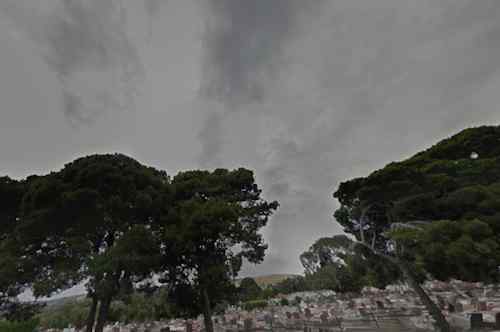 "John knows no middle course," says Barnabas Lindars. (pp24) We perish,  or have eternal life. There is light, or darkness. There is seeing, or not seeing. In all the stories, there is the contrast between the literal and superficial, and the deeper meaning and significance. We can be satisfied with mere water to drink, or find something ultimately quenching of our thirst for meaning and significance. We can have our eyes opened to see deeply below the surface appearances of life, or we can remain blind.

In the story of Lazarus this all comes to a climax. "The reader cannot fail to see how this is a sort of dress rehearsal for the resurrection of Jesus himself." (Lindars pp382) Jesus' death and resurrection is the last sign of John. It is the either-or thing which somehow facilitates a transition from perishing to eternal life.

What strikes me about all this is how much, despite the fact that this gospel warns us of the blindness which comes from looking at the surface, we persistently revert to literal readings. Yes, born again is a metaphor, (John 3) living water is a metaphor, (John 4) but don't dare suggest that the healing of a lame man (John 5) was not literally true, that the feeding of 5000 did not actually happen, (John 6) or that the blind man was not literally healed. (John 9)

And in John 11? The hint is plain. Martha says, "I know that he will rise again in the resurrection on the last day." But Jesus drives her deeper. "Jesus said to her, I am the resurrection and the life. Those who believe in me, even though they will die, will live, and everyone who lives and believes in me will never die." This presents us with the same deep diving below the surface that is everywhere and John.

Martha's first response to Jesus was the common belief in resurrection of her time, which could be a shallow as our stories of meeting St Peter at The Pearly Gates. She hears Jesus and makes a deeper confession. But as William Temple said, "… it was not a new faith; it is an old faith come to fuller consciousness."  (pp182) She is diving deeper, but there is something more to see.

She is faced with the same dilemma as all of us: "'I am—  the words of divine self-declaration— the Resurrection and the Life.' How can he actually be the Resurrection? … there is a forcing of language to express and unutterable thought." (Temple pp181)

Temple says we can put some of this thought into words: "For those who are in fellowship with Jesus the life to which that Resurrection leads is already present fact." The story of Lazarus' resuscitation and the story of Jesus' resurrection are not stories of literal truth; they go far deeper. They witness to something now, in the face even of death, which is an experience of being at one, being at home, being in tune, with the eternal, bottomless reality in which we find ourselves.

Please understand what I am saying. I am not denying the resurrection of Jesus. I am saying there is something far greater, far deeper, than the literal reading all these stories. They are witness to deep reality.

I think an insistence on the literality of these events always risks are refusing to confront the absoluteness of our physical death. Jesus' physical resurrection offers us a way to tame death; it allows us a measure of definition and control over death; it avoids finally letting go of everything and trusting God in the unknowableness of death. To say that the resurrection of Jesus is not a metaphor is to limit resurrection, and make it more shallow than it is.

I used to regret the theological study which allowed me to see metaphor, and which taught me the critical skills to see those obvious literary constructions which alert us that the biblical texts are not simple literal history.  As a younger person I was unconsciously immersed in the metaphors. I grieved the loss of that. But that unconscious immersion meant I thought the metaphors were the reality. Forced to see the metaphors, I am confronted by the need for living in faith; not a need for belief  in a list of doctrinal points,  but a need to simply live trusting that our end is our end;  I mean that our dying is our purpose. Our dying will take us more deeply into the reality of what is.

I, too, am "forcing language." Am I actually talking about anything real? There is truth in what Alexandra Neel-David once said. " … the truth learnt from another is of no value … the only truth which is living and effective … is the truth which we ourselves discover." Only as we live in compassion which costs, and only as we pay attention to the world, instead of our iPhones, will we discover these things.

I can witness to my experience at two funerals. Funerals outdoors or, at least a burial outdoors, are important. In parlour or chapel, with the decorous drawing of curtains, death is sanitized and, even at the funeral, made somewhat remote. At an open grave, or at the furnace, I imagine, we are confronted with our true smallness in the universe—reminded of our place, and confronted with the brute facts of our decay and destruction.

The first funeral had been in a crowded church, hot, with camp dogs creeping in under the rough wooden fuse. The road for the cortege was rough, dusty, and it ended with a sweating walk under a high range. In this surreality I could follow only a word or two of the liturgy which was in another language, but then the words rang out, unmistakable: Lazarus come out!

I was officiating at the second burial, high over the city, scudding clouds unable to block out the sun, moaning pines, hot, but with a rainstorm threatening. There is always a part of the preacher or reader which stands aside, attune to the congregation, directing one's reading, adding pauses and emphasis, choosing words. And this part of me, listening to it all, suddenly knew: these words are true. They are in tune with what really is. This is not the end; this is our End.