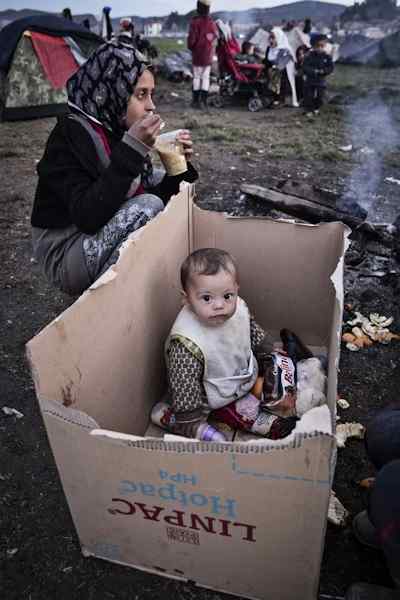 Do you remember the last nativity pageant you saw? No room at the inn, shepherds in the stable, three kings... Well, probably there was no inn at all; the word we translate as an inn is more usually the guest room, the spare room. And when Mary and Joseph arrive unexpectedly, Uncle Fred and Auntie Maud and their kids are already in the guest room, along with John and Mabel's mob. So Joseph's second cousins in Bethlehem put him up in the only space left; the back shed where they keep the donkey... it's a bit like we might get a spot on the back veranda when one of those big old families with 7 kids and 25 grandkids all come home to Grandma's farmhouse for Christmas.... and when Jesus is born they use the only thing handy as a cradle— hey there's a big cardboard box in our carport at the moment; it had the new barbecue in it; use that! (I do not know the owner of this iconic image from Syria. Can you tell me its copyright owner?)

There are only shepherds in Luke. There is no star, and there are no Magi. The Magi and the star belong to Matthew's nativity scene; we don't know if there were three, that's an assumption, and Mathew's nativity is in a house,  and has no shepherds. And the Magi... are not kings.

We get a lot of that stuff from Christmas cards and some old carols and too many not quite biblical nativity plays.

This is very significant, because Babylon is one of the old and great enemies of Israel, and Matthew shapes his story around the memory of Babylon and the Exile of Israel in Babylon. Three times in the story, he quotes the Old Testament, which itself was dramatically reshaped in the light of the exile to Babylon.

What Jesus' culture was saying when they quoted the Old Testament was two things. First, it was a way of saying, "I'm not just making this up, you know— it's in the Bible. You can see God had this planned, and now God is making it happen... like God said it would happen."

So what do the three readings say? All three are about God's faithfulness in bringing people home from exile, and freeing people from exile, and God not deserting Israel. Matthew is saying that not only is Jesus' birth a coming home, a return from exile, but also... that even Babylon, the great enemy,  recognises that Jesus, a Jew, is the Messiah. Even the conquerors have repented and come before God!

Which all puts Herod in a very bad light. What we see, in Matthew's nativity, is that Herod, a Roman ruler, won't listen, and won't bow before God.

Herod is the local figure head of the Roman Empire. In the story he symbolises Rome. The story says that Rome tried to kill Jesus from the very beginning.

Even as one Empire finally repents and worships God, another rebels against God's kingdom. Matthew's nativity play is the one which is true to life; it recognises how life is, and how the powers reject God.

If we did Matthew's nativity play in church, the Magi would kneel before the Christ child, which is a way of saying they kneel before God. And then as they leave, Mary suddenly scoops up the child and flees for her life out the side door to my right...

As it slams and we wonder what on earth is happening, armed soldiers burst in through the main door behind us and storm down the aisle looking for little boys whom they will kill.

What will the soldiers do when they find us here in the church? Where is our hope? How can we live as Jesus' people if we are threatened, terrorised, and abused.

Numbers of my colleagues and I— and congregations— have had police at church— standby breach of peace at a bikie's funeral— or had people throw stuff through their windows, but Matthew lived in a really rough situation, where people were being killed. So he goes straight to the bottom line.

Don't be afraid of people who kill you. They can kill your body, but cannot kill your soul." And then at the end of the Gospel he says "Remember, I am with you always, to the end of the age."

Even if they destroy you, even if life humiliates you, I will be with you. You will live. So love well and live now!  And be free.

Re: Kingship
Andrew Prior 07-01-2019
Bill, I was going to say we don't have this game, but realise we play it with Prime Ministers :) You may appreciate this: https://www.onemansweb.org/bikes/bikes-life/billie.html Andrew