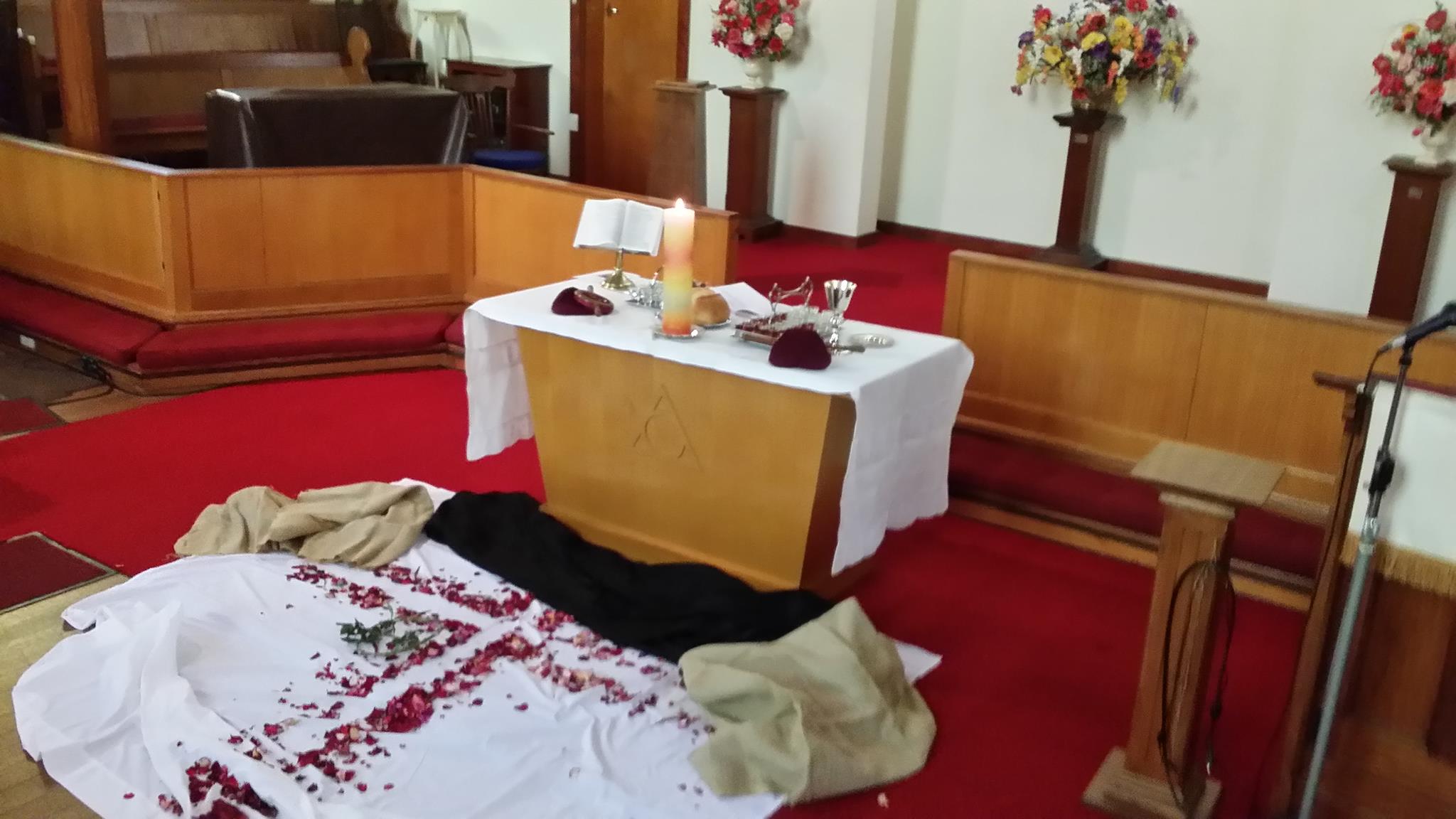 In our congregation we have used a Good Friday liturgy written by Dorothy McCrae for a number of years.  On the Sunday, we have often then placed the Communion Table over the outline left by the cross.  I explained this to one of the small children at Good Friday this year, and saw him a few minutes later, go and stand next to the cross and say, "We can stand here and be safe!"

You will see reference to this-- we move the table back into place during the Easter Service-- towards the end of the sermon below.  The draft of this sermon was written several days ago, and if featured the biblical character Job. Sermon drafts always change, and so does this one. So now we have the sermon rather more like it will be this morning.  May it speak to you.  Andrew, Easter Morning 2019.

The Big Issue "is a street newspaper...  [which] exists to offer homeless people, or individuals at risk of homelessness, the opportunity to earn a legitimate income." To be a Big Issue vendor usually means to be doing things tough. Like many of the folk who spend a lot of time in the street, some of the Big Issue vendors in Adelaide have a dog, or another pet, who goes with them. And this week, Fifi the Chihuahua was kidnapped from Rundle Mall. Anyone who has loved a little dog can imagine how painful that was for her owner.

Well, the good news is that Fifi has been tracked down and rescued, and returned to her owner. I think this is an example of the Kingdom of Heaven irrupting— breaking in to our reality. The powers that be, police and Council and media worked together to scouring CCTV and other sources to track Fifi down... all for a poor woman and a little dog who live at the bottom of pile. This is how life should be. The big issues of the rich and powerful were placed to one side while justice was done for a poor woman and a little dog. There is some delightful footage of Fifi dressed in what looks to be a tiny South Australia Police Hi Viz vest on FaceBook. The caption says: "After Fifi was located at a Richmond home last night and before being reunited with her owner, she spent time hanging out with Detectives at the Grenfell Street Police Station where she was inducted as a recruit police dog!"

And then there is the photo on our order of service. Here the caption says:

Lance Cpl. Pierre Mugabo carries a cross at the head of his father's funeral procession. His father died of malnutrition while in a prison camp in Zaire, Africa, now known as the Democratic Republic of Congo.

And as we take in the photo, we realise that the Lance Corporal is maybe ten years old; he is a child soldier. Here the world has rejected the Kingdom of God and we are helplessly snarled in our violence and greed. A little boy walks in a suit and a bow tie, carrying a cross for his father. The big issues of the powers that be have destroyed his father, and stolen his innocence and his childhood. The photo is twenty years old now; is Pierre even alive today?

The disaster of war in Zaire is bound up with demand for cobalt among other things, which is a key ingredient in mobile phones and tablet batteries. We are all complicit in Pierre's pain, for we all covet our phones. And our western desire for comfort duplicates that demand for privilege many times over and impoverishes the world, and causes environmental disaster.

If the resurrection of Jesus is to mean anything, then it must work itself out in the same love and justice for Pierre as Adelaide found for a few hours for a poor woman and her dog. God's love for all folk is just the same, whereever they are, and that includes Pierre. And it means you and I need to be healed of our power and privilege and fear of death, so that others can simply live.

When Jesus came, people had a kind of Fifi the Chihuahua moment! Because he was different. He connected with people. He treated all people with love and compassion. With him, even if you were the lowest of the low in society's eyes, even if everyone else hated you, even if, apparently, you totally deserved it¸ you were somehow at home. He accepted you. He treated you as a decent human being loved by God. He treated you no differently than he would have treated anyone else. Even if you were a very poor person, even your little dog counted.

Except... the Romans and their Jewish collaborators, and even the people who had longed for Messiah to come, teamed up in Jerusalem and had him killed. And the ordinary poor people of the day were left on their own as usual.

So Cleopas and his friend are going home. Jesus is dead. It is all over. The world is only blood, destruction, and child soldiers, after all. We had hoped "Jesus of Nazareth, who was a prophet mighty in deed and word before God and all the people... was the one to set Israel free," Cleopas said to someone they met on the way home. "But he's dead. Some women came from the tomb and said it was empty and that angels said he was risen, but they were delirious*. He's dead."

But the stranger disagrees, and "beginning with Moses and all the prophets" he reinterprets their world for them. He paints an entirely different way of seeing reality. He paints a picture of the world where, even in their grief and distress, they see again the vision of the renewal and the completion of creation, and of all that is, which they had begun to glimpse in the presence of Jesus. It's almost as if he's back with them again.

And so they invite him to stay the night, and as they sit at table he breaks the bread as Jesus used to break it— and they realise that in this stranger Jesus himself has come to them; it is him, he is raised from the dead, and they realise the world will be renewed... there will be justice for everyone, not just for the lucky few— you can imagine the implications falling over each other in their minds as they struggle to take it all in. They race back to Jerusalem to tell the others and find Jesus has appeared even to Peter, the one who had denied him, and as they share their story, Jesus comes to them again... all of them who are gathered together.

If you go home and re-read Luke Chapter 24, you will find something interesting. The appearance of Jesus to Peter gets 11 words (in English). Just 11. That's because the story of Peter is saying that Jesus appears even to those of us who let him down in the worst way. The main story, the defining story of Luke's Easter appearances, is the story of the Emmaus Road, which is more than 400 words!

And if you thought the moment they recognised Jesus sounded suspiciously like a Communion Service, you would be right. Luke is telling us that the way to meet the Risen Lord is to be gathered around the table for the breaking of bread. Not in some way that makes the bread and wine into something almost magic, but in the sense that when we live out the new reality that he shows us, then we are able to see him... although there are times when we don't.

I said that on the way home to Emmaus Jesus painted an entirely different way of seeing reality. The Way, is the Gospel story, the one that tells us about loving all people despite the cost— all people.  What that means is that here, in Hare Street, if we were to keep out the unlovely people, and the difficult and scary ones, and the smelly ones, and the noisy ones— all those people who make being church hard work— then we would probably be turning Jesus away, too.

When we invite the strangers into the church, all those odd people who make us uncomfortable, then what we are doing is breaking bread at table in the way Jesus did. And Jesus will be there, unrecognised in the strangers, and then suddenly present to our eyes.

I think this is what Jesus was talking about, a new world with a new way of living which is so different to what we experience, and it's why they killed him. The rich and powerful of the day didn't want to lose their power and privilege.

But what about Pierre? And all those who, even here in Adelaide, fall through the gaps? It happens very easily.

Resurrection means not only that Jesus is raised, and that you and I are raised. It means that every Pierre, and every poor woman, is raised to new life. Resurrection means that Creation will be completed, and made good and just for all creatures, even those who were at the bottom. Even for those who were evil among us. Even for me.... and you... who have also lacked goodness.

We do not know how this can be. We cannot even imagine how such a thing could happen in its fulness. It makes no sense in a world where bloodshed and exclusion is the way to power. But we can learn in this place here, the same thing discovered by Jesus' original disciples: When you are in his presence, when you meet him, you know that death does not destroy us, evil does not win in the end, and life will go on. We can, as we have done today, place the table over the place of the cross, and stand.

It is not that we live only in hope, sort of keeping our heads down and waiting for something to happen. We can do much more. We can break bread together. We can begin to live out the reality Jesus showed us in his love of all people, and he will appear to us— have we not seen this already?  Amen.

* The word translated as "idle tale" by the NRSV is leros. Can you see how we may have ended up with the word delirious? [I owe this to David Lose: "Luke says that those who received the testimony of the women regarded their message as an “idle tale.” That’s actually a fairly generous translation of the Greek work leros. That word, you see, is the root of our word “delirious.” So in short, they thought what the women said was crazy, nuts, utter nonsense." ]