31 At that very hour some Pharisees came and said to him, ‘Get away from here, for Herod wants to kill you.’ 32“He said to them, ‘Go and tell that fox for me, “Listen, I am casting out demons and performing cures today and tomorrow, and on the third day I finish my work. 33Yet today, tomorrow, and the next day I must be on my way, because it is impossible for a prophet to be killed away from Jerusalem.” 34Jerusalem, Jerusalem, the city that kills the prophets and stones those who are sent to it! How often have I desired to gather your children together as a hen gathers her brood under her wings, and you were not willing! 35See, your house is left to you. And I tell you, you will not see me until (the time comes when) you say, “Blessed is the one who comes in the name of the Lord.” ’

Wikilyiri came up from the farm one morning to tell me that a dingo had broken into the chook shed. All the hens were dead. Over a hundred of them were torn to pieces with the needless savagery we associate with humans rather than animals.

In Luke, Jesus is doing God's work in Galilee, casting out demons, performing cures. The ruler in Galilee is Herod Antipas. He is part of a dynasty who rule by terror. He has already killed John the Baptist, and now he also wants to kill Jesus. Some Pharisees warn Jesus about this. Jesus says something like

Tell him he can do what he likes. I'm doing God's work, and I'm on the way to Jerusalem where they will kill me anyway. Yes, Herod is a fox in the hen house; a dingo-vicious, mean killer. But in the plan of God, Herod is irrelevant.  He has no power over me; I am to die in Jerusalem.

Jerusalem will think it is killing Jesus in order to remain the City of God... and to keep the city safe, but in doing that it will reject God, just as it has when it has killed every other prophet.

Jerusalem, Jerusalem, the city that kills the prophets and stones those who are sent to it!

And Jesus, speaking for God as he says this, does not hate Jerusalem, does not fear it, but mourns for it.

And then we have the most remarkable image of God. For God reveals herself as the  mother hen who places her wings around us, her little chickens, and comforts us when we are afraid. God styles herself, describes herself, .... as one of those hens who are torn apart by the dingos and foxes as they shelter the chicks.

Yeah, well that's helpful. Most people don't even know God describes herself like that, and why would they? Who wants a God who loves her people, but can't protect them? In our very sensible fear we long for a God who is bigger and stronger and meaner than Herod, and Pilate, and Jerusalem. We long for a God who will be kind to us, and keep us safe by killing our enemies.

The idea of God as the mother hen is just sentimental mush. It is unreal emotional foolishness.

We say God's ways are not our ways... (Isaiah 55:8-9) but do we really believe it? What if God is saying to us... that death is nothing? What if God... is saying that our calling is to be like Jesus: gentle, casting out demons, performing cures... and getting ready to die, for that is the next step in life, and that— that— is what makes us fully human? Could it be that it doesn't matter if we die, or when we die, for God has something bigger in mind for us— for all of us?

Could it be that God seeks to draw us close to her to shelter us in a place— a little brood-church,  where we can learn that as humans, we have completely misunderstood life, and death, and love?

What we are called to do is simply trust ourselves to the love which holds us warm; to give up all our ideas of being strong and staying safe; and to weep when we can't hack it. If only we would just love others— seek to love—  and weep in God's arms as our loving teaches us to re-see the whole world! Life might look very different. We might be free of the compulsion to get, and to hoard, and to stay safe.

To be saved... is not to be able to do all the right things and be unafraid. It is not to win, or to be a success, and have people say what a good person we are. To be saved... is to go out and love, and live gently, and to retreat weeping, when it is too hard. It is to trust and find that the God whose ways are not our ways is still there. The weak mother hen God is not even destroyed by death.  Love makes death nothing.

We have two images to contemplate this morning. The first, from the altar of a church in Jerusalem, shows the chickens, the children of God, gathered under the wings of God. 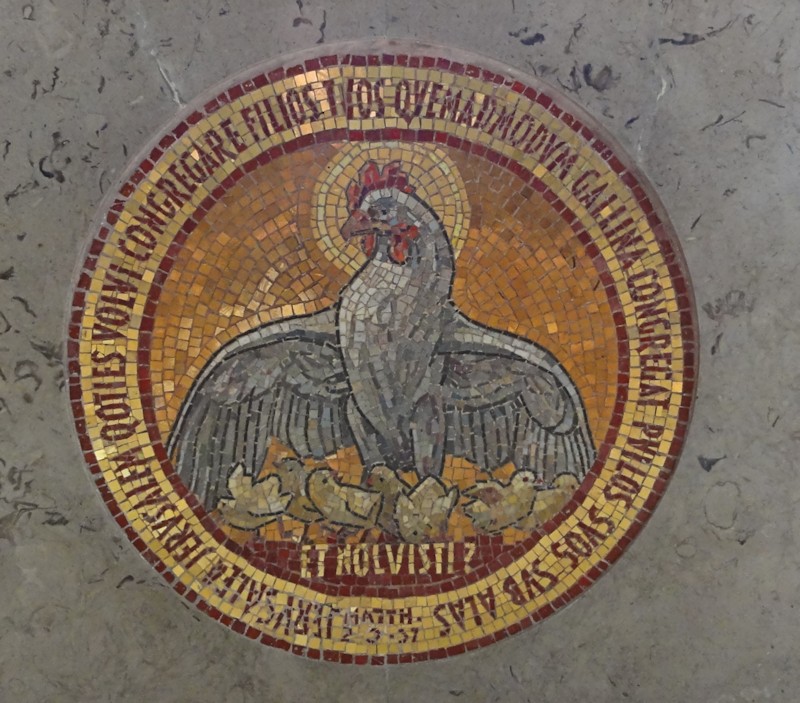 (The Church of Dominus Flevit) By User:Mattes - Own work, Public Domain

The second image is the same thing... only viewed from the cross. Here, the same chickens are gathered. 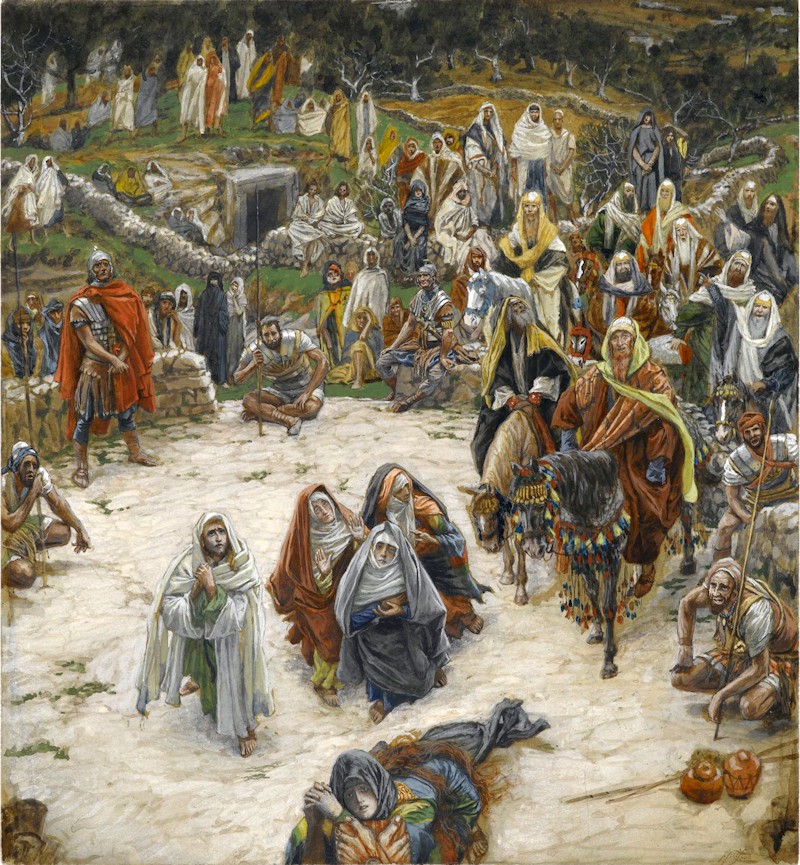 I think those weak, weeping, powerless women gathered under the outstretched wings of the mother hen, are saved. They know their weakness, and do not deny it. They know that this attempt to kill God again, to destroy yet another prophet, is life destroying only to the killers.  And when these women find that the Christ has risen, the city will see nothing. Not yet.

The leaders on their horses have had the city— their house— left to them. In all their finery and power, they are blind to what is happening. They think they have won. They will not see the Messiah— pray as they like— until they welcome the one they killed but have not destroyed.

This goes against all common sense. Lent mocks everything precious about our keeping our lives safe. It terrifies me, but Lent, and Christ, and the cross,  point to the only salvation I can find. To live a large hearted life as if death were not, that impossible task, is all that we have. We can only trust that God is greater than death, and that in Jesus... God has shown us that death does not win.

The last person I observe is the centurion.

Then and there, he holds the power of life and death. He stands on the path to the tomb. He is the visible power of Empire. And he knows it is not working.

What will he do?

And what, and who, will we trust? Amen.