For he has looked with favour on the lowliness of his servant. Luke 1:48

If you follow the way that this man Jesus shows you, you will find a life which is sublime. Not famous, not rich, perhaps not even successful in the eyes of the world... but sublime. You will know, and you will rejoice, because you will find you have been led into a life worth having and into a life worth living. God will come to you in your humiliation and affliction and lift you up so that all folk will see you are blessed. What I’m saying is that Jesus guides each of us into a life worth living no matter what has been done to us, not matter what we have suffered. We get... to really live.

So how does this relate to the Christmas story-- after all, it’s Christmas Eve? To understand what that story is about, it might help to remember things like this:

Have you seen this sort of thing on the Internet? 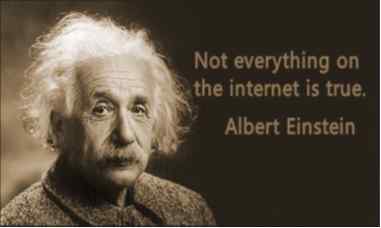 Not everything you read on the Internet is true.  Albert Einstein.

Well, that's true... but he never said it, of course. Albert Einstein died in 1955, well before the Internet was thought of. Yet all over Facebook and the internet you will find that Albert Einstein said this... and Morgan Freeman said that...

We have a habit of placing something we think is really important into the mouths of important people. It’s a way we try to get people to take notice.

In Jesus’ time, people did the same thing; the Christmas story was a way of getting people to take notice.

They didn’t have the internet, and they couldn’t even make up Albert Einstein quotes either...  because Albert Einstein hadn’t been invented yet. The way they did things, so that you would know a person was important, or a story was important, was to show how God had been involved in the life of a person, or to show how God had influenced their story. So it was very common to say that a person was a child of God, that they had one human parent and one divine parent.

In many places you didn’t have to be a Kardashian to be famous, you had to have a God as one of your parents.

So Luke carefully tells us that at the time Jesus is born Emperor Augustus orders the whole world to be counted. Now, Augustus often called himself Divi Filius which means son of the God. Lots of people have pointed out that Luke is having a joke here, because even though he was sometimes also called the Saviour of the World, and even though he could order the whole world to be counted, all Caesar Augustus achieved with his census... was to get the Messiah to Bethlehem just in time to be born in just the right place.

Luke is also doing something else. Do you remember the movie Crocodile Dundee when the kid pulls out the knife and Michael Dundee says “This is a knife...”  Well, what Luke is saying to all those stories about Caesars and kings is “You call that a divine birth...  this is a divine birth!”

So... Rome… you think you have a divine ruler!? This is the son of God. Augustus? Mere putty in God’s hands. God’s finger prints are all over the birth of Jesus.

Now in our churches, we sometimes make Christmas all about the baby. We even make the baby a bit... unreal: “no crying he makes.” Really!?

We domesticate the Christ child. And the wider society tries to ignore him altogether. I’m told someone saw a nativity scene in a shopping centre and grumbled to their companion, “Now those Christians are even trying to get Jesus into Christmas!”

Why are we keeping Jesus out? Why do even Christians so constantly domesticate him and trivialise him as "the baby Jesus?"

His followers had come to believe that he was the Messiah, the one who would put the world to rights. But his death was a death of shame and humiliation, and apparent defeat.  He was killed by the empire of Rome. He appeared to be a failure.

And yet the people who knew him were sure that he was still alive to them; they were sure he had risen from death. They said that if you would risk his shame and humiliation, and risk even his death by following his way of living, then you would find a life worth living, a life which is not ridiculous, but which is sublime. This is what they had learned.

So they told the story of his death and resurrection; it’s the same story we tell at Easter; it's in all four gospels. And then, as introduction, they added many of the stories about what he did during his life.

And one of the highlights in Mark is learning to give ourselves to others, to serve as Jesus served. Jesus says, "whoever wishes to become great among you must be your servant, 44and whoever wishes to be first among you must be slave of all. 45For the Son of Man came not to be served but to serve, and to give his life a ransom for many."  (Mark 10)

And then, years later, Luke and Matthew, who didn’t know each other, also place stories of Jesus birth at the beginning of their gospels. They are different stories— Luke didn't think about wise men, for example, but both of them say, “If you read this story of his birth, you will understand who this man is, and you will understand what his death and resurrection mean.”

Luke says you will understand that
he was chosen by me,
before he was born,
to show you…
the way to life.
I bent the Emperor of Rome to do my will
so that Jesus would be born in just the right place,
the place where the Messiah is born,
which is the city of David his ancestral father.

God is saying, through Luke, that
Jesus’ apparent humiliation  and defeat i
s not humiliation and shame and defeat, at all.
It is the “real reality” of creation: power doesn’t come from the mouth of a gun, or at the point of a spear. Power and a life worth living come from us giving life to others, even if it kills us.

Luke is saying that what people call humiliation means nothing to God. Do remember that Mary says “he has looked with favour on the lowliness of his servant?” The Greek means he has looked with favour on the humiliation and affliction of Mary. She is a poor peasant woman at the bottom of the heap but God has shown her favour, not only as Mother of Jesus, but really, as a mother of us all.

It’s not very poetic to put it like this, but really, it's saying that if God will bless a peasant woman like Mary, isn’t it clear that God will bless even us?

So the Christmas story is saying that God comes even to us.
If we follow the one who is born we will follow on the way to life.
God is not showing us a baby who does not cry; God is giving us a person to follow and be like.
If we learn to give away our life itself, if need be, we will find that life really is worth living. It is in giving life to others that we are healed.

Andrew Prior (2018)
Direct Biblical quotations in this page are taken from The New Revised Standard Version Bible, copyright 1989, Division of Christian Education of the National Council of the Churches of Christ in the United States of America. Used by permission. All rights reserved. Please note that references to Wikipedia and other websites are intended to provide extra information for folk who don't have easy access to commentaries or a library. Wikipedia is never more than an introductory tool, and certainly not the last word in matters biblical!