On the Death of my Father

Jesus said to them, ‘I am the bread of life. Whoever comes to me will never be hungry, and whoever believes in me will never be thirsty.36But I said to you that you have seen me and yet do not believe.37Everything that the Father gives me will come to me, and anyone who comes to me I will never drive away; 38for I have come down from heaven, not to do my own will, but the will of him who sent me. 39And this is the will of him who sent me, that I should lose nothing of all that he has given me, but raise it up on the last day. 40This is indeed the will of my Father, that all who see the Son and believe in him may have eternal life; and I will raise them up on the last day.’

41 Then the Jews began to complain about him because he said, ‘I am the bread that came down from heaven.’ 42They were saying, ‘Is not this Jesus, the son of Joseph, whose father and mother we know? How can he now say, “I have come down from heaven”?’ 43Jesus answered them, ‘Do not complain among yourselves. 44No one can come to me unless drawn by the Father who sent me; and I will raise that person up on the last day. 45It is written in the prophets, “And they shall all be taught by God.” Everyone who has heard and learned from the Father comes to me. 46Not that anyone has seen the Father except the one who is from God; he has seen the Father. 47Very truly, I tell you, whoever believes has eternal life. 48I am the bread of life. 49Your ancestors ate the manna in the wilderness, and they died. 50This is the bread that comes down from heaven, so that one may eat of it and not die. 51I am the living bread that came down from heaven. Whoever eats of this bread will live for ever; and the bread that I will give for the life of the world is my flesh.’

You can listen to this sermon here

A few years ago, during a conversation, my father startled me with a sharp criticism of one of my clergy colleagues. Understand this: the criticism was valid. I would have said much more, and much less gently. What startled me...  was that this was my Dad saying these words! Later, I realised I had never heard him ‘bag’ anyone before; I was nearly 50.

In our house, if I got up on my hind legs and had a go at someone, Mel would always point out the extenuating circumstances. I’ve always been struck by my Mum’s compassion towards people; if she was moved to utter words of criticism, they were past due. And yet, even then, Mel would say, “Oh, you have to remember what his life’s been like....,” or “Yes... but in that family....”

The world is actually full of good people. We could use more, but they are not in short supply. We also have a world full of law abiding people; most people actually do the right thing, and for all the little laws they break, they often do better at other times where the law is an ass.

We moan about the lack of such good people, but in truth, despite all the horrors of the world, it is not them we lack. What we lack is compassion; that quality which is more concerned for people than for what is right.

He said to the Pharisees, and he was quoting the Old Testament, “Go and learn what this means: ‘I desire mercy, not sacrifice.’” It means God desires compassion of us, not what is right according to the law.

In John chapter 8, a woman was dragged out to be stoned by a lynch mob. She’d been caught in adultery; notice the man is not included in this. The good people of the church of the time, the Pharisees and the Scribes, used her as a test case to try and trip up Jesus. Should  she be stoned, like the law said? And Jesus does not say she should not. How could he? The Law said she should be.

Instead he said, “Let the one who is without sin cast the first stone.”

“When they heard it, they went away, one by one, beginning with the elders; and Jesus was left alone with the woman standing before him. 10Jesus straightened up and said to her, ‘Woman, where are they? Has no one condemned you?’ 11She said, ‘No one, sir.’ And Jesus said, ‘Neither do I condemn you. Go your way, and from now on do not sin again.’”

If we do not do this, we are not following Jesus.

In the bluntest possible terms, what distinguishes Christian behaviour and faith from behaviour which is less than Christian is this: The person who is not being Christian essentially says, “Let us fulfil the law and do what is right, and exact punishment, and then, if there is anything left over, we will think about having mercy.”

Jesus said and did the opposite. He had mercy. He asked what the person needed, and then, if necessary, he worried about the law.

We don’t like it. It seems to ignore all our fine theological ideas and doctrines. But this is called compassion and mercy. It is the thing to which our doctrines should point. That sinner we still call the Good Samaritan had mercy. The good Priest and Levite, who had law and doctrine on their side, did not.

Without compassion, doing the right thing becomes cold charity, and risks corruption. Law becomes oppression, and scripture becomes a weapon, and even evil.

In the readings today, Jesus is contrasting two kinds of bread; you remember he has just fed the people out in the wilderness. Bread saves us when we are starving in the wild places of life.

If we are not eating the right bread, then we die. Jesus is saying He is the bread that gives life. When we eat communion this morning, we are eating Jesus. We are taking him into ourselves. We are asking to become like him.

Have you seen bugs in fruit; there are two kinds. Some have a husk, a shell, and they stay black or brown, regardless of what they eat. Others, like fruit fly are soft. They take on the colour of what they eat. A fruit fly is red in tomato and orange in mandarines.

Jesus is asking us to let our hard outer shell be cracked. He is asking us to take on his colour. We are to be stained with compassion. If we are not, then we are not eating the true bread. We are like the crowds who were not quite seeing what Jesus was on about. They wanted bread, but not bread that fundamentally changes us, and fills us with compassion... and life.

There  is a test we should set ourselves every so often. It consists of a few a simple questions. “Am I becoming more gentle? Am I acting with more compassion? Have I become more understanding, and more loving of people?” Or we could just read Matthew 25, and wonder where we would be standing, if we were in that story. 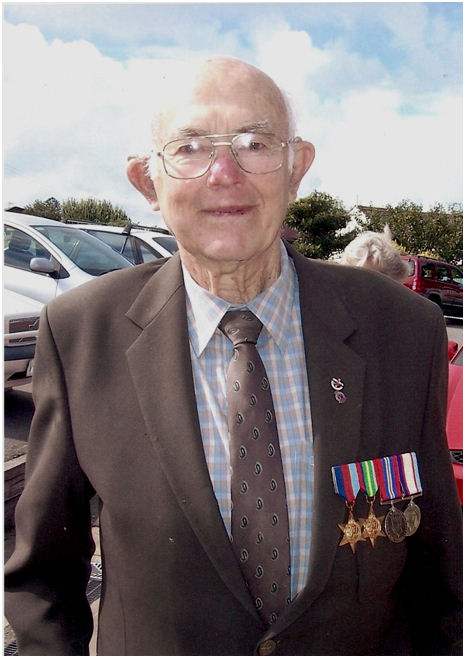 There is a side effect to all this. If we become more compassionate to others; if we are gentler on them, and less condemning, we are able to become gentler on ourselves. As I have, very slowly, begun to learn the lessons my father taught me, I have been set free. As I have stopped judging and condemning people—not that I called it that—I have stopped judging and condemning myself. I no longer hate myself. I can actually enjoy life.

Dad was remarkably peaceful in the face of death. I’ve seen him get more worried over the price of wheat than he was about discussing resuscitation options with the doctor! “Do what you can, but nothing special; let nature take its course,” he said.

On reflection, I think he had a feeling he was not going to make it. Being Mel, of course, he didn’t saddle us with that. He didn’t have to. He was at peace. Like some other folk I’ve been with near the time of death, he seemed rather unconcerned by the fact. He was already in that dimension of life which we call eternal, and which we can have now.

When we eat the bread and drink the wine this morning, don’t just eat bread. Let it change you. Let yourself be loved. Love others. It does set us free.