He left that place and came to his home town, and his disciples followed him. 2On the sabbath he began to teach in the synagogue, and many who heard him were astounded. They said, ‘Where did this man get all this? What is this wisdom that has been given to him? What deeds of power are being done by his hands! 3Is not this the carpenter, the son of Mary and brother of James and Joses and Judas and Simon, and are not his sisters here with us?’ And they took offence at him. 4Then Jesus said to them, ‘Prophets are not without honour, except in their home town, and among their own kin, and in their own house.’ 5And he could do no deed of power there, except that he laid his hands on a few sick people and cured them. 6And he was amazed at their unbelief.

Then he went about among the villages teaching. 7He called the twelve and began to send them out two by two, and gave them authority over the unclean spirits. 8He ordered them to take nothing for their journey except a staff; no bread, no bag, no money in their belts; 9but to wear sandals and not to put on two tunics. 10He said to them, ‘Wherever you enter a house, stay there until you leave the place. 11If any place will not welcome you and they refuse to hear you, as you leave, shake off the dust that is on your feet as a testimony against them.’ 12So they went out and proclaimed that all should repent. 13They cast out many demons, and anointed with oil many who were sick and cured them.

One of the reasons we know the Gospel is true, is that Jesus was a small town boy. He had family. He had a history; saying he is Mary’s son is an insult about his illegitimate parentage. ( Juel:  Mark, Augsburg Commentary on the New Testament See Stoffregen.) Despite the fact that he had remarkable things to say, and clearly had been given great wisdom, (6:2) his home town “just knew” he was getting above himself.

An expert is someone who is a long way from home. Legends sanitise their subject. Legendary people don’t have an embarrassing past; their media staff airbrush it away, and their lawyers sue for silence. Legends fit the image.  Celsus’ great objection to Jesus, apparently,

Jesus was lower class; a builder.(6:3) He had a past and a history.  You can imagine someone saying, “Boy... I changed your poohey nappy.” That statement encapsulates the “mentality that geographical and heredity origins determine who a person is and what his capacities will always be.” Ben Witherington says this is an ancient mentality. Clearly, Americans are far more sophisticated than we Australians are; there’s nothing at all ancient about this mentality, in my experience!

The hymn says it all:

When God Almighty came to be one of us,
Masking the glory of his golden train,
Dozens of plain things shared the experience,
And they will never be the same again.

Sing all you midwives, dance all the carpenters,
Sing all the publicans and shepherds too.
God in his mercy uses the commonplace,
God on his birthday has a need of you... (Michael Hewlett AHB 214)

This is incarnation. There is no other way to meet God. 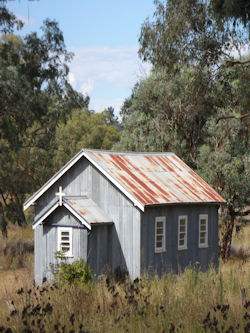 How much is our longing for God, and our sense of separation from God, and the sense of the unreality of  church and faith,  not due to our pride, or our lack of commitment, or lack of prayer? How much is it due to our inability, or our refusal, to see God acting in the common place? How much are we looking for a legend to idolise, rather than a local who will love us?

How much do we refuse to see the power of God at work in our neighbours and friends; after all, we know them so well? The church seems to be addicted to experts from overseas, or at least interstate. It seems like every second Synod we have some overseas keynote speaker.

Yet, at our last Synod, the local staff presented the Saturday resourcing sessions. They were competent, even insightful. They highlighted a couple of parish projects that are breath taking in their scope and achievement. Projects run by local people like Jesus; ordinary people with histories and failings.

Tonight I am to be inducted into a new parish. I will be their .25 minister! They are legendary. They “hit way above their weight,” I have been told. It’s true; I am hugely impressed by what I have seen and heard. I hear that those who have interviewed me, and met me as we have negotiated, are quite impressed with me, too.

Tonight this mild infatuation begins to end. I’m going to find out that these legends at Hare Street, are just locals. I bet someone will tell me over supper, that someone else in the congregation is a loose cannon, or “not quite solid.” I’ve already been given the “heads up” on someone by an acquaintance in a neighbouring parish. I’m sure Hare Street has been given “the goss” on me, and my limitations.

As the real relationship begins, will we seek the incarnation of God within and among ourselves, or will we look for a legend? If Hare Street seeks an expert in me, they will be badly disappointed. And if I do not find things in which to be disappointed, or with which to struggle, they will be unique in all the parishes on earth! But if we will seek God in and among our hometown selves, then Jesus will do deeds of power there. (6:5)

It says  that when the disciples were sent out by Jesus , they “cast out many demons, and anointed with oil many who were sick and cured them.” (6.13) Brian Stoffregen notes the following:

Crossan compares and contrasts Cynic missionaries and Jesus missionaries. Both groups were allowed to carry a staff. The Cynics were to carry "a bag" (or "knapsack"). Crossan writes: "What it symbolized for the Cynics was their complete self-sufficiency. They carried their homes with them. All they needed could be carried in a simple knapsack slung over their shoulders" [p. 118].

By necessity, Jesus’ disciples became locals. They were not self sufficient; they had no bag, by command. They depended on the community of faith, which did not put them up at a good hotel, but had them in their homes. The community smelled their sweaty feet, and learned their limitations, just as they learned the limitation of the locals. No experts here, specifying the mattress type and bed size if they were to come and speak at Synod. The incarnation and power of God is found, instead, in the local legends.

Love
Rhys at how-to-preach.org 07-07-2012
You said; "How much are we looking for a legend to idolise, rather than a local who will love us?"; - this is the key, we just have to love others If we love enough, it might grow into a legend, but simple love is the foundation on which we build.