Then he went about among the villages teaching. 7He called the twelve and began to send them out two by two, and gave them authority over the unclean spirits. 8He ordered them to take nothing for their journey except a staff; no bread, no bag, no money in their belts; 9but to wear sandals and not to put on two tunics. 10He said to them, ‘Wherever you enter a house, stay there until you leave the place. 11If any place will not welcome you and they refuse to hear you, as you leave, shake off the dust that is on your feet as a testimony against them.’ 12So they went out and proclaimed that all should repent. 13They cast out many demons, and anointed with oil many who were sick and cured them.

17 For Herod himself had sent men who arrested John, bound him, and put him in prison on account of Herodias, his brother Philip’s wife, because Herod had married her. 18For John had been telling Herod, ‘It is not lawful for you to have your brother’s wife.’ 19And Herodias had a grudge against him, and wanted to kill him. But she could not, 20for Herod feared John, knowing that he was a righteous and holy man, and he protected him. When he heard him, he was greatly perplexed; and yet he liked to listen to him. 21But an opportunity came when Herod on his birthday gave a banquet for his courtiers and officers and for the leaders of Galilee. 22When his daughter Herodias came in and danced, she pleased Herod and his guests; and the king said to the girl, ‘Ask me for whatever you wish, and I will give it.’ 23And he solemnly swore to her, ‘Whatever you ask me, I will give you, even half of my kingdom.’24She went out and said to her mother, ‘What should I ask for?’ She replied, ‘The head of John the baptizer.’ 25Immediately she rushed back to the king and requested, ‘I want you to give me at once the head of John the Baptist on a platter.’ 26The king was deeply grieved; yet out of regard for his oaths and for the guests, he did not want to refuse her.27Immediately the king sent a soldier of the guard with orders to bring John’s head. He went and beheaded him in the prison, 28brought his head on a platter, and gave it to the girl. Then the girl gave it to her mother. 29When his disciples heard about it, they came and took his body, and laid it in a tomb.

In 1852 a ship called The Birkenhead struck a rock off the African coast and sank. All the women and children on board were saved because they were given the right to get in the lifeboats, while the soldiers and crew waited, and then swam for their lives. Only 193 of the 643 people on board survived. The saying “women and children first” dates from this time, and is called the Birkenhead Drill. It was used on the Titanic, where, as a consequence of this practice, 74% of the women on board were saved and 52% of the children, but only 20% of the men.

Here was a world view, with lots of problems , by the way, which nonetheless said you didn’t put yourself first; you did your duty and what was right. Other people are more important. 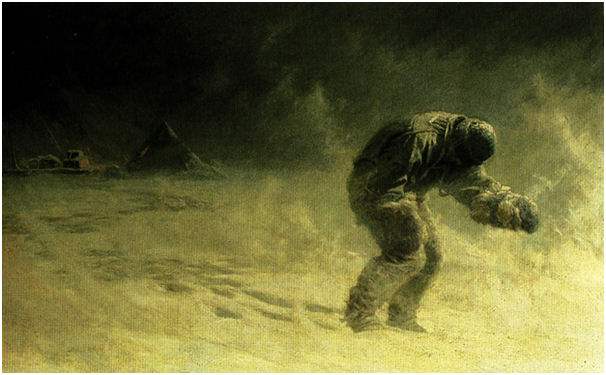 In Antarctica Scott’s expedition refused to abandon Captain Oates, despite the fact that he was slowing them down and would probably cause them all to die. So one night Oates said, “I am just going outside and may be some time.”  You don’t put yourself first.

After  the cruise ship  Costa Concordia sank last year this was written, “Reports from the survivors of Concordia seem to be unanimous in condemning the failure of the crew, who are said to have shoved women and children out of the way in their anxiety to get to the boats. There were senior officers alongside [the captain,] Schettino who seem to have found their way safely off the ship while the passengers were left to themselves."

What we see here is a clash of world views. In the one case self is not first, but duty to something higher is first. In the other, my self is everything, and too bad if you get in my way. It doesn’t matter that the Birkenhead Drill was ‘more honoured in the breach than the observance,’ what we can see is two opposing views of how the world should work.

And we can see that the view which we hold can change everything.

One way to understand the gospel of Mark is to see it outlining for us two opposing world views, and their consequences.

So far, in the story, Jesus has been preaching and teaching and living out a world view he calls the Kingdom of Heaven.

The kingdom of heaven is how the world would be if we lived the way God wants. It’s summed up in the prophets; we sing the song: every person ‘neath their  vine and fig tree shall live in peace and unafraid, and into ploughshares turn their swords, nations shall learn war no more. (Isaiah 2:3-5, Micah 4:3) As I keep saying to you in sermons, this will so fundamentally change the nature of our being that the basic enmities of earth will be overturned; Isaiah imagined even the wolf would lie down with the lamb (Isa. 11).

The Kingdom of Herod is different. Herod has a feast. “Herod on his birthday gave a banquet for his courtiers and officers and for the leaders of Galilee.”

What we see at this feast is a show of power.  It is a contrasting power to the power of Jesus. It is the power of privilege and military might. It is the power that comes from being a player in the structures of Empire. It is a feast where it seems Herod can do as he pleases, wine women and song, daughters to dance as desired, and people to be beheaded if needed.

John the Baptist’s death is actually a minor event, a single verse in the story. People don’t matter as people. In Herod’s Kingdom, and at Herod’s feast, people are not fed, they are used.

The guests are not being hosted, let alone loved. They are there to be impressed, to provide admiration, even to worship. Herod uses his guests, like everyone else, to promote and preserve his power. Look at me! Look at what great feasts I can provide! It is the unsubtle preening of a peacock, without the beauty. And everyone else at the party is doing the same thing. It’s no different to the schmoozing at a business dinner or society event today.

This is a dog eat dog world. Herod needs to impress these people so they will back him up and support him. This will mean he can show the Romans that he is in control, and can manage the place for Rome. Which means the Romans will let him be king.

Really, Herod is very weak. This the great paradox of dog eat dog power. There is always a dog waiting for you to fall.

John the Baptist has been preaching to Heord, and it’s fascinated him. I think Herod longed for what John had. He glimpsed in John that “something more” about for which we all long; that something else that life in politics, or keeping up with the Joneses, doesn’t give us.

He wanted to hear what John had to say. He was looking for God. But he chose power. He had John, who was offering him life, killed. He killed John because he did not want to risk losing his kingdom, as so he killed his great hope.

None of us, I think, fail to see how perverse and evil life was in Herod’s palace. But the thing to see here, is not only his oppression and violence. The thing to see is the feast. Because after Herod’s feast, we will see Jesus’ feast.

The next section of Mark is a deliberately contrasting feast to Herod’s feast.

What we live in the midst of today, is the Kingdom of Herod. It’s the big money, the fine houses and the pretty cars. We are promised that if we work hard, we’ll be part of the kingdom. We’ll get a good return. Life will be good.

Yet when we look at the big players in this kingdom, the politicians and business people, and the celebrities, what do we constantly see? How the mighty have fallen! (2 Sam 1) How insecure is power! How power corrupts us!

And when we look at our share of the kingdom, the little bit that trickles down to us, what do we see: big TV’s, huge mortgages, long credit card bills, people living in the parks, and unfulfilled promises of happiness. False promises.

Understand what happens if we don’t enter the kingdom of Herod. We become like John the Baptist, and Jesus. Laughed at. Scorned by the rich and powerful. We may get killed for our trouble, or jailed, or sidelined.

But Herod gives us nothing more. We still die. And before that, We may sell our soul in a desperate attempt to stay on top.

I said at the beginning that the way we view the world can change everything. Mark is showing us two views, to kingdoms, Herod and Jesus. Who will we believe, and far more importantly, to which kingdom will we give our lives?

What we decide to do will change everything.