Beyond Bread and Kingdom

After this Jesus went to the other side of the Sea of Galilee, also called the Sea of Tiberias.  2A large crowd kept following him, because they saw the signs that he was doing for the sick. 3Jesus went up the mountain and sat down there with his disciples. 4Now the Passover, the festival of the Jews, was near. 5When he looked up and saw a large crowd coming towards him, Jesus said to Philip, ‘Where are we to buy bread for these people to eat?’ 6He said this to test him, for he himself knew what he was going to do. 7Philip answered him, ‘Six months’ wages would not buy enough bread for each of them to get a little.’ 8One of his disciples, Andrew, Simon Peter’s brother, said to him,9‘There is a boy here who has five barley loaves and two fish. But what are they among so many people?’ 10Jesus said, ‘Make the people sit down.’ Now there was a great deal of grass in the place; so they sat down, about five thousand in all. 11Then Jesus took the loaves, and when he had given thanks, he distributed them to those who were seated; so also the fish, as much as they wanted. 12When they were satisfied, he told his disciples, ‘Gather up the fragments left over, so that nothing may be lost.’ 13So they gathered them up, and from the fragments of the five barley loaves, left by those who had eaten, they filled twelve baskets. 14When the people saw the sign that he had done, they began to say, ‘This is indeed the prophet who is to come into the world.’

15 When Jesus realized that they were about to come and take him by force to make him king, he withdrew again to the mountain by himself.

16 When evening came, his disciples went down to the lake, 17got into a boat, and started across the lake to Capernaum. It was now dark, and Jesus had not yet come to them. 18The lake became rough because a strong wind was blowing. 19When they had rowed about three or four miles, they saw Jesus walking on the lake and coming near the boat, and they were terrified. 20But he said to them, ‘It is I; do not be afraid.’21Then they wanted to take him into the boat, and immediately the boat reached the land towards which they were going.....

26Jesus answered them, ‘Very truly, I tell you, you are looking for me, not because you saw signs, but because you ate your fill of the loaves. 27Do not work for the food that perishes, but for the food that endures for eternal life, which the Son of Man will give you. For it is on him that God the Father has set his seal.’

We could almost have a Jesus who was amazing and inspiring, but ultimately only human, like us. This Jesus would appear in Mark, from an uncertain origin— a builder, perhaps— and share an entrancing and captivating insight into the nature of God, and what it means to become fully human.

God’s will for the world, God’s kingdom, according to this Jesus, is everything the world is not. Justice is really meant to happen, not just be a tool for the rich to control and exploit the poor. God loves people, all people, and has mercy on them. God is not the patron of the rich and powerful, but the lover of the poor.

All people are profoundly equal in the eye of God, and the reason for our personal good fortune is so that we may build up the lives of others.

If you will live according to this vision, says our Jesus, it will change your life utterly. It will bring the kingdom into being, creating a small pool of a different, transcendent reality around you and your community. You will become a co creating agent alongside the Divine as the world is changed and grows into a new reality. It will be dangerous, and likely cost you dear, but will lead you into an authentic life with such depth, that you can barely imagine it before you begin. It will change you utterly, transform the way you experience the world, and make life worth living.

In my small experience, seeking to live as Jesus has shown us does do this. In fact, if God is Not, and if existence is mere, blind, uncaring chance where the word “providence” is totally without meaning, the example of Jesus is all we have.  In all my thought experiments, and my few years of life, I can find only one reason for living. That is to work to make the radical re-visioning of the world which Jesus and those like him imagined, a reality. Nothing else is worth it.

In such an interpretation of the Gospel, the brutal reality of life is fully accepted. The cost of justice and doing right is not underestimated. The transcending power of compassion is recognised. And we can let the miracles be miracles; the gospel authors thought these traditions, decades old when they met them, were real. We suspect we know better, but their naiveté does not matter; it does not negate the powerful reality of the kingdom of heaven at hand. This vision is so powerful, so needed, and so transforming in even the small glimpses we receive, that we can ignore the pointers to Jesus divinity within the gospels.

John is careful not to say Jesus is God; ‘My Father is still working, and I also am working.’ But in a paradox that we cannot resolve, it is clear that Jesus is somehow everything else but that!

In the feeding this week, whether your loyalties call it the Sea of Galilee or Tiberias, Jesus is greater than Moses who went up the mountain to teach. He is feeding the people in a way that overshadows the time of Passover. He is greater than the prophets; we are reminded of Elisha (2 Kings 4) by the multiplication of barley loaves. But the miracle of Jesus’ feeding far exceeds that of Elisha’s. Elijah “set it before them, they ate, and had some left, according to the word of the Lord.” Elijah had more loaves and yet fed only a hundred men.

It’s not the bread that counts, but Jesus, who is the bread.

26Jesus answered them, ‘Very truly, I tell you, you are looking for me, not because you saw signs, but because you ate your fill of the loaves. 27Do not work for the food that perishes, but for the food that endures for eternal life, which the Son of Man will give you. For it is on him that God the Father has set his seal.’

Jesus comes to the disciples walking on the sea, another image from the Hebrew Scriptures. God alone

... stretched out the heavens
and trampled the waves of the Sea (Job 9:8)

Jesus did not walk on the water; he walked on the sea, that never-safe deep, which can swamp us and drown us without warning. (Brian Stoffregen brought this difference to my attention.)

And in this mighty act of power he introduces himself as “I am,” of whom the disciples are rightly afraid, for this is the Divine. “It is I” is the name of God. Trinitarian theologians can explain the subtleties of Father, Son and Spirit, but for the rest of us, this is simply a claim to divinity.

This Jesus is not a man who has spectacular insight into the nature of the Divine, whatever “divine” might mean. This Jesus is Divine. John is uncompromising in his claim. And he forces us to see that the same claim is implicit in Mark. We can’t wiggle out of it. The people who write about this man are sure he is more than just a man, even a singularly spectacular man.

They also challenge us about the nature of God. We can be sensibly a-theist about the old man sitting in the clouds, but we are not being directed to some comfortably undefined “ultimate meaning of the universe.” The reality of Jesus, Mark, and John includes a divine presence which is somehow relational and personal.

Bill Loader begins his commentary this week, in the following fashion.

In recent weeks we have been looking at passages in Mark which precede and then surround the feeding of the 5000 and its sequel, the walking on water. Mark has developed the symbolism of bread to represent the gospel and to celebrate that this good news is both for Israel (5000) and for the Gentiles (4000). ..... The framers of the Lectionary take us away from Mark just when we might expect Mark’s account of the feeding of the 5000 and switch us to John.

I am always annoyed by this excursion into John. Why not let Mark speak for himself?  Like other colleagues, I wonder about the value of a four year lectionary.

... is not altogether inappropriate because John has developed the symbol of bread even further, to the point where Jesus himself becomes the bread.

If anything, John’s account heightens the miraculous character of the story by emphasising Jesus’ foreknowledge. At the same time we find John again cautioning against making the miracle the focus without going beyond that to appreciate the person of Jesus, as he had done in 2:23-25 and 4:48. John has little sympathy for the crowds who follow because of the miracles (6:2). They will reach the wrong conclusion by trying to make Jesus king (6:14-15). They fail to see the miracle as also a sign of something more (6:26).

John is not denying the miracle, but he is making the point that there is something to be seen here which goes beyond the miracle.

This speaks to that Jesus, who is ultimately just an extraordinary man who has discovered God, with whom I began this article. If I focus on his vision of the Kingdom of Heaven, I am a little like those who followed Jesus because of the bread. I am focusing on the kingdom rather than on Jesus-who-is-in-some-sense-God.

He is in-some-sense-God. If I see him I see God.

I have let myself be seduced by a vision of the Kingdom of God.  I have let go of my concerns that Jesus could not possibly have done the miracles attributed to him. Mark believed he did them. I don’t, and it doesn’t matter, because the vision of Kingdom that Mark has been placing before me stands without the miracles. It is all I have.

Now John seeks to seduce me too, but further, with a vision of Jesus. He is saying to me that the Kingdom is like bread; filling, sustaining, life giving and necessary. But the kingdom is not the end of the matter; there is more. Otherwise, I risk making the kingdom God. 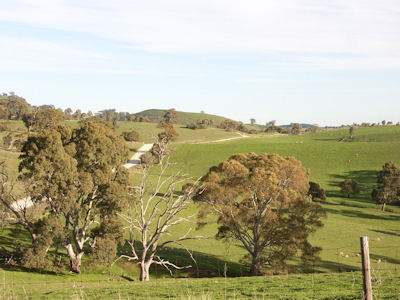