A Cafe of the Gate of Salvation

56Those who eat my flesh and drink my blood abide in me, and I in them. 57Just as the living Father sent me, and I live because of the Father, so whoever eats me will live because of me. 58This is the bread that came down from heaven, not like that which your ancestors ate, and they died. But the one who eats this bread will live for ever.’  59He said these things while he was teaching in the synagogue at Capernaum.

60 When many of his disciples heard it, they said, ‘This teaching is difficult; who can accept it?’ 61But Jesus, being aware that his disciples were complaining about it, said to them, ‘Does this offend you? 62Then what if you were to see the Son of Man ascending to where he was before? 63It is the spirit that gives life; the flesh is useless. The words that I have spoken to you are spirit and life. 64But among you there are some who do not believe.’ For Jesus knew from the first who were the ones that did not believe, and who was the one that would betray him.65And he said, ‘For this reason I have told you that no one can come to me unless it is granted by the Father.’

66 Because of this many of his disciples turned back and no longer went about with him. 67So Jesus asked the twelve, ‘Do you also wish to go away?’ 68Simon Peter answered him, ‘Lord, to whom can we go? You have the words of eternal life. 69We have come to believe and know that you are the Holy One of God.’

It’s not been much of a week following my Dad’s death. I’ve mostly been exhausted, and slept from Tuesday to Sunday. But last night I gave my son and his friends a lift into the city, and then drove home alone. I listened to Cafe of the Gate of Salvation on the drive home; magnificent a capella renditions of Gospel songs turned up loud enough to challenge any doof doof Commodore I met as I headed home to Elizabeth.

I considered why this music should be comforting. The words are, at first hearing, pious Victorianesque schmaltz which is a sentimental universe away from any grounded theology. But this music is something about pointing beyond literal words. It is about an experience; it’s an affirmation. Cafe’s music is the soul singing to God. It is the deep inner part of me singing to the depths of being:

Sometimes you don’t know why you got to stand up and moan,
sometimes you’re feeling so strong you feel it in your bones-
Sometimes your spirit’s running to your heavenly home...

Why this introduction to the gospel of the week? Well, it’s been weeks of John and bread. Preachers are beginning to wonder what else to say. I notice some colleagues on the preaching lists have taken leave of absence from John, and preached a while from the Ephesians readings. I sympathise.

Even John’s church had trouble with eating the body and drinking the blood of Jesus!  The conversation and dispute of Jesus is no longer with the Judeans, but within the congregation. Verse 60 says that “when many of his disciples heard it, they said, ‘This teaching is difficult; who can accept it?’”

If we remove the aura of Scripture for a moment,  this teaching is barbaric and gross-- and ridiculous. Eating the body and blood of Jesus is disgusting, and  makes no literal sense at all. Taken literally, what we do at communion is an irrational act. There is no body or blood, only bread and wine.

Yet as Jesus said, “You think this is a problem? How crazy do you think people will think you are when you say my shameful execution on the cross is actually my being raised to glory by God!??” (6:62)

In Bill Loader’s commentary this week he begins with the challenge of Jesus to the cultural tradition of the time. John claims Jesus replaces what the “Torah always had been: the source of life.” Bill  goes on to say

Fear of losing their tradition is, I suspect, what held other disciples back from joining this confession. Fear is frequently a factor in such resistance. It needs to be heard.

John suggests it was also an overemphasis on literalness. Pieces of the jigsaw that do not fit together at all at that level of perception may at another. To some degree it is about how religious language works. It is not that our faith should remain abstract, but there is strength in recognising that much religious language is extended metaphor and that behind it may lie a meta-language, a grammar of meaning which can generate a diversity of statements, but at its core makes a single claim. John’s religious language is certainly like this. Its single core claim is about life in relation to God. Jesus is the major image or icon in whom we see God’s light and life.

In our culture in the west, the source of life is not Torah. It is Rational Control of our own destiny. From the setting of interest rates to the demonising of refugees, our governments seek to control the nation using the rational sciences. We seek to rationally defeat the advertisers’ psychologists as we debate the merits of an iPad versus a Galaxy Tab.  Fear of losing control, and losing power, drives us at every level. 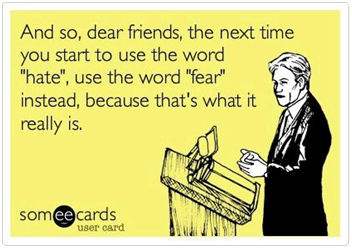 John is inviting us to let go of control. In the words of Tony Backhouse’ magnificent piece which I quoted above

I fell down on my knees when I heard the call... (In The Spirit)

Eating the body and drinking the blood is to speak a different language. It is to let go, to fall on our knees before something we cannot express but which feeds and fills us beyond any rationally explicable food. It is speaking in a meta language of things that eye has not seen but for which mind and spirit have longed, and which they sometimes taste. For we Christians, “Jesus is the major image or icon in whom we see God’s light and life.” When we eat the body and drink the blood, it becomes palpable.

I see this at Communion in our little congregation, where we are so few we can gather around the communion table. We creak our way up there, chairs put down for the infirm, some seated at the bottom of the two steps, too old to climb up. Little children and old grannies eat and drink together.

What we have is as profound as all the wisdom of science and arts. It fills us. As soon as we seek to explain it, it falls apart in our hands. But to whom else can we go? Here we have found the words of eternal life. All we can do is fall on our knees when we hear the call. Here we are at a cafe at one of the gates of salvation.

A Cafe of the Gate of Salvation
Pam 19-08-2012
My thoughts and prayers are with you at this difficult time Andrew. Thanks for this sermon.