When the only colour is black, the only sound a broken bell; THEN talk to me about why.  --Spike Milligan

I remember us standing on the College roof watching the Hills in the dusk of the Ash Wednesday fires, full of foreboding. Radio journalist Murray Nichol had provided the commentary as his house burned, but no one quite knew what was happening. Sometime during the evening our brother and sister in law staggered in out of the dark, shocked, singed, stinking of smoke, barely able to describe what had happened to them.

In the middle of a bare paddock, a hundred metres, perhaps more, from the forest, their house had simply caught fire from the radiant heat. The gutters and the downpipes had melted. Inside they had wondered if they were being roasted alive.

Next morning we found how lucky they were. 28 people were dead in South Australia alone.

Imagine if this shock, so profound, was as nothing, and if the far worse Victorian fires in 2009 were nothing. Imagine if 173 dead, 414 injured, and 400 separate reported bushfires on that one day were just a blip in history.

The final destruction of Jerusalem of which Mark speaks, had a death toll in the tens of thousands; nobody really knows how many, but I’ve seen estimates as high as 200,000.

It is not the deaths that were so staggering, God help us, but something more that was happening.

The destruction of the temple was different. For Jewish people, it was the centre of the world.

Jerusalem was destroyed. The nation was devastated. Already towns and cities elsewhere had been wiped out. Imagine all our state capitals and all the regional centres in Australia being overrun, with thousands of residents slaughtered over a period of 3-4 years. Then we are getting somewhere close to what happened to Israel; 20,000 dead in Caesarea; fifty thousand Jews killed in Alexandria in Egypt. (Josephus.) People fleeing Jerusalem in the final siege were crucified at the rate of 500 a day, even more. There was a rumour that the Jews were swallowing their gold coins and ornaments, so in the final attack the Roman soldiers ripped people’s guts out, looking for money. 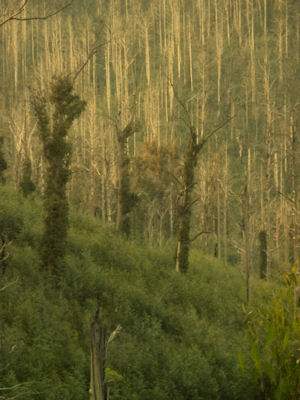 But the significance of the fall of Jerusalem went even beyond the horrific death toll, and the apparent destruction of the nation. The temple, and its city, stood as a sign of God’s presence and favour in the world. It was all gone. What had happened to God? For a Jew it must have felt that the world had come to an end.

In the middle of all this were the Christians, a small group of people who claimed to follow an obscure, resurrected preacher, called Jesus of Nazareth, who had been crucified by the Romans as a rebel, some thirty years before. That man was dead, and yet they claimed still... to know him. Many of them were Jews, and some of them had thought this last rebellion against the Romans was a part of his returning in glory to save them.

These people were already unpopular. They had an experience of God which they interpreted through the wildly unlikely notion that their prophet had been raised from the dead, and was seated at God’s right hand... and that he would come again to save them, and set the world to rights.

It is clear from Mark—he said, “Many will come in my name and say, “I am he!” and they will lead many astray,”—that many of these Christians were caught up in the failed Jewish rebellion. The Christians, too, must have wondered what had happened to God. Was all their faith in vain? Jerusalem was their place too; their temple even.

It is in this situation that Mark writes his gospel. Understand that he is not writing history at leisure. He is writing in the smoke of the disaster, or perhaps just before, when the terrible ending is obvious and inevitable.

When we read Mark with this understanding what do we see?

We see Jesus saying that this destruction must happen. There will be wars and rumours of wars, fathers will betray their children to death... but all of this is as nothing. These are but the beginnings of the birth pangs.

So the first message we might take from Mark is that the fall of Jerusalem is not the end. And that the fires on Ash Wednesday and Black Saturday, and the Twin Towers are not the end. We might think that Mark speaks with an authority that is much greater than mine; he was there. He knew.  And still he said: this is not the end.

But there is a message that is more profound.

Think about the Gospel he wrote. This Jesus was going to save the world. That’s what they thought. He was a healer. He worked amazing signs of the presence of God; mass feedings that foreshadowed what Israel thought God would do, and which reflected the great events of the Exodus. He raised the dead.

Imagine Mark as a movie: the warnings are there. Three times he tells them he will be killed and raised from the dead. No one really understands what it means though, not even us who are watching two thousand years later. What happens is a disaster.

This is not what you write to win friends and influence people! This is as brutal and savage as you can get. This is like Jerusalem all over again... except that it already happened before Jerusalem.

And in the middle of his foretelling of the doom of Jerusalem, Mark has Jesus saying, “The one who endures to the end will be saved.”

Is he saying something like, “You know him! You know he is here, even though at his death it seemed everything was destroyed. So why worry about Jerusalem? It as nothing... birth pangs... the one who endures to the end will be saved.”

Or is he saying, “As it was with Jerusalem, so it is with the Christ. Even though they destroyed everything, we are still here... his dying is but birth pangs... the one who endures to the end will be saved!”

Perhaps he is saying, “Have you seen?! Have you seen how even when everything is destroyed, when our “Jerusalems” are smashed down and our temples burned, God is still here? God is still with us! Truly this man was the son of God! (15:39)”

I think he is laying down a challenge. He is saying that if we look, if we endure, then even when our temples are destroyed, even when the Christ is dead and gone, and we see no one... if we look, if we go back on the road to Galilee, living as he lived, we will find he has gone before us. And we will see him.

Or we could cling to the destroyed city of our life, and remain in our despair. Amen.