Another attempt to understand why Mark puts the destruction of Jerusalem and the death of Jesus together.

In a church somewhere, they pray for Marianne who has cancer, and whose life is gravely threatened.

“You don’t have enough faith.”

Marianne we are told, is ill, only because she does not have enough faith.

It is a travesty of Christian charity. And it is utterly wrong.

What happens when the city of Jerusalem is destroyed?

Pretty much the same as Marianne’s battle with cancer.

The temptation is to say, “Well, they didn’t have enough faith.” It is too hard, and too frightening, to contemplate that God chose not to save, let alone that perhaps God could not save, and that our understanding of God is lacking.

But then Mark writes a gospel based around the fall of Jerusalem. He wrote, the scholars believe, during, or just after that last hopeless war.

The Gospel has the fall of Jerusalem as a kind of precursor, a rehearsal, a run up, to the crucifixion of Jesus. Who despite all his prayers,
despite everything...  all his good works,
all his faithfulness to God...
doesn’t escape crucifixion.  He’s killed.

The Messiah, the very centre of Israel and its faith is destroyed.

It is so bad that on the cross he cries, “My God, my God, why have you forsaken me?!”

Some of the later gospels couldn’t quite cope with that, because it seemed like Jesus didn’t have enough faith either. So in John we see that Jesus says, “It is accomplished!” It is a cry of triumph, not a cry of despair. 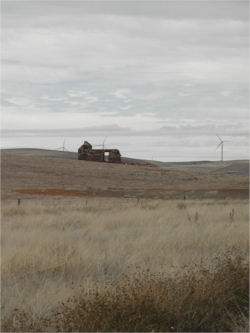 But, in fact, what Mark is trying to show us in his gospel is that when you face the fear rather than rejecting it,
when you go through the fear,
when you go to the bitter end—there is no picture of resurrection in Mark—no one ever sees Jesus raised from the dead in the Gospel of Mark---
when you go through it all,
when you keep going, keep looking, go back to Galilee,
and do again the things Jesus would do if he were in your shoes...

then you’ll see him. Then God will be real.

You don’t get through life, and you don’t find God by rejecting the things of fear... by avoiding them. You go through them.
When Marianne was dying , they were afraid and they said, “She hasn’t got enough faith.” They rejected the fear.

It’s a bit like when Jesus was dying,
and he was afraid...
it’s as though he had suddenly he jumped down off the cross and run away.

Then,
then,
back in Galilee,
on the road,
living like Jesus would live,
we will find he has gone before us.

He is still there,
God still is,
and we are still loved.
Amen