Sitting of a Row of Tacks

If came in and found that Howard and June’s favourite pew had a row of tacks sticking up through the seat, what would I do? I’d tell them. I’d say, “Don’t sit there!”

And June and Howard would say, “Gosh, thanks!!” They wouldn’t ignore me and go and sit there anyway.

After all, I was not picking on them, or trying to make life difficult, or just making up rules for the sake of it. I was wanting them to be able to enjoy church, and to have the best time possible. So I said, “Don’t sit on the tacks!”

It’s the same with God. Jesus Christ came so that we might have life in all its fullness, it says in John 10:10. So when he teaches us about stuff to do, or not to do, it’s for our good, not because God is trying to make life difficult.

This is the essence of our faith. It is about finding a way in life that is humanising, that is good, and that will enable all people to be happy. It is not God making rules; it is God giving us a way toward the Kingdom of Heaven, and to eternal life now.

What happens way back in verse 30 in Mark Chapter 9 is that Jesus turns the world upside down. He says the Messiah, the one they all thought would be a conquering hero, would be betrayed and killed, and then rise again. The path of the Messiah was to suffer and die. This is not some crazy idea God has. This is the model for our living if we want to have Life—real life.

The disciples ignored that. They learned from Chapter 8 not to argue with Jesus about it, but they ignored it. It seemed to hard.  More strange Jesus stuff.

Instead, on the way, they argue about who is the greatest. Just like us. This passage is full of repetitions, and one of them is here. Mark uses the phrase “on the way,” twice. On the way is his code phrase for those who follow Jesus; it includes us.... 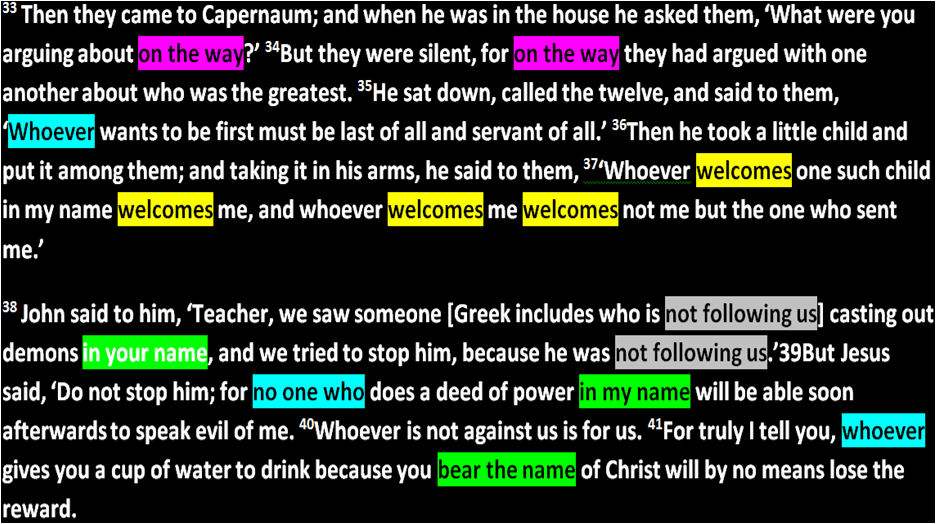 Sometimes this is not so obvious; in one congregation to which I belonged, the “Who is the greatest?” game was about who had the key to the Ladies’ Fellowship crockery cupboard, and the good coffee! But we all do it. We are all tempted to make sure we hold the power, and are top dog.

When Jesus says the greatest must be least of all, and servant of all, he is talking to us.

And he drives the lesson home. He says look at the least person of all; a little child. If we welcome a little child; if we look after a little child, and look after the least of the people among us and around us, we welcome Jesus, and we welcome the One who sent him. And we are also not worrying about who is the greatest. If we don’t do this, we are like people who go and sit on a row of tacks. We harm ourselves by rejecting God’s telling us how life can be good.

When Jesus picked up the little child he said:

Talk about not welcome!

Verse 38 is an immediate and deliberate contrast to the verse before!  Welcome, welcome, welcome, welcome... we forbid. And, although it is translated out in the New Revised Standard Version, there is a repetition of the words “who was not following us.”  The man was forbidden by the disciples to cast out demons in Jesus’ Name because he was not one of them... us; that is.

John just hasn’t learned the lesson. He is still really talking about who is the greatest; about who belongs and who doesn’t and is not great. He is thinking in the way of the world, not the way of Jesus.

Ironically, the man the disciples wanted to define out was successfully casting out demons; they had just failed in that same activity in verse 18. Sometimes those we disparage seem, nonetheless, to be achieving things we are unable to achieve! (HT to Brian for this insight.) But when we do that, I think we are going and sitting on a row of tacks.

We are undermining our hopes of a good life with God because we are jealous; because we want to be the greatest.

Jesus seems to be saying that what defines acceptability to him is not membership of our little group. What matter is if a person is acting “in my name.” The phrase is repeated over and again:

whoever receives one such child in my name...
casting out demons in your name...
no one who does a deed of power in my name...
because you bear the name of Christ....

What matters for eternal  life is doing things in Jesus’ name; acting the way Jesus would act. If we reject people who are acting like Jesus would act, but who are not members of our little clique, then we are like people who go and sit on a row of tacks... and then ask why God didn’t protect our bottoms.

Now it seems that there were other people around the place, who were not working in Jesus’ name. They were hostile to the community. So Mark has Jesus saying whoever puts a stumbling block in the way of the community of the little ones who believe in Him risks a terrible end. It would be better if they had a millstone around their neck and were cast into the sea. We should not here that he is not talking about people within the church misbehaving. He is talking about anyone who does this; the Greek says “whoever puts a stumbling block...
inside or outside the community of faith...

And then he has a tack-sitting warning for us!

If we really want to have Life, the good life God wishes us to have, our response to persecution should not be to curse our persecutors. Do you notice that as soon as he has talked about the ones who place stumbling blocks in the way,  Jesus'  talks about how we should live?

Let’s be honest, when someone has a go at us, our strategy is to have a go back. Even if we cannot stop them, we tell each other how bad they are. When we feel threatened by people, we paint the worst  picture possible of them.

We often take the role of victim, which lets us excuse our own faults, and even allows us to justify wrongdoing; how can it be our fault, how can we be blamed? We are righteous; the ones being sinned against, here.

But rather than rail at those who sin against us, Jesus calls us to make sure there is no sin within us. Don’t worry about them; worry about yourselves. The Greek is clear... your hand, your foot, your eye... you in the church.

It is better for you to enter life maimed than to have two hands and to go to hell, says Jesus.  It is better for you to enter the kingdom of God with one eye than to have two eyes and to be thrown into hell. He’s using vivid imagery, exaggerated imagery, but the context means he is talking about things that harm our community life. Things that are not welcoming and that are not serving others. Things that harm others.

He’s telling us that if we do not attend to our own community life, and if we do not accept the children and the least of all people, we are sitting down on a row of tacks.

He’s turning everything about power, and greatness and belonging up side down.

The people in Mark’s time came from a tradition that saw maimed and imperfect people and animals as not blessed of God and not holy. Sacrifices had to be without blemish. But Jesus says, Maim yourself rather than allow unhealthy community life. If this strikes us as exteme imagery, it was even more so for the listeners!

Prune your behaviour. Live well. Look after each other. Don’t seek revenge. This is the most important thing as a church. Live well! Live clean! Look after the least!  --not to keep God happy, but so you will have life!

This gives us life. If we will not give up the unhealthy struggle for power, and who is the greatest, we will never sit comfortably in life.