35 Jesus said to them, ‘I am the bread of life. Whoever comes to me will never be hungry, and whoever believes in me will never be thirsty.36But I said to you that you have seen me and yet do not believe.37Everything that the Father gives me will come to me, and anyone who comes to me I will never drive away; 38for I have come down from heaven, not to do my own will, but the will of him who sent me. 39And this is the will of him who sent me, that I should lose nothing of all that he has given me, but raise it up on the last day. 40This is indeed the will of my Father, that all who see the Son and believe in him may have eternal life; and I will raise them up on the last day.’

41 Then the Ioudaioi began to complain about him because he said, ‘I am the bread that came down from heaven.’ 42They were saying, ‘Is not this Jesus, the son of Joseph, whose father and mother we know? How can he now say, “I have come down from heaven”?’ 43Jesus answered them, ‘Do not complain among yourselves. 44No one can come to me unless drawn by the Father who sent me; and I will raise that person up on the last day. 45It is written in the prophets, “And they shall all be taught by God.” Everyone who has heard and learned from the Father comes to me. 46Not that anyone has seen the Father except the one who is from God; he has seen the Father. 47Very truly, I tell you, whoever believes has eternal life. 48I am the bread of life. 49Your ancestors ate the manna in the wilderness, and they died. 50This is the bread that comes down from heaven, so that one may eat of it and not die. 51I am the living bread that came down from heaven. Whoever eats of this bread will live for ever; and the bread that I will give for the life of the world is my flesh.’

Seventy or eighty years after the death of Jesus there are some dilemmas. Folk have clung to their faith in Ha-Shem, the One who fed them in the wilderness and brought them to the Promised Land. They still feel the presence of this One, despite destruction of temple and city and country. They remain faithful despite the absurdity of their faith as it faces the power of Rome.

But some sisters and brothers, and friends, have declared a new faith; well, so it sounds. They speak of the man Jesus, who sounds like an alternative God, despite what they claim. They speak of new knowledge, a different quality of life. They seem to imply that the old faith, the words of life which have sustained the generations, are somehow inadequate, even wrong.

By the time John is writing, the breakdown is almost complete. John is busy explaining to his folk, the new believers, why the others have not understood; why the Father has not drawn them to Jesus. He is making the startling claim about Jesus that he is the bread of life. He is a new manna, superior to the manna in the wilderness, which finally was insufficient as food for life, for people ate it and they still died.

The battle lines are set. This is little different from the division and pain and despair in a congregation where some see that God loves gay folk too, while others find that anathema; where some see marriage equality as the logical extension of God’s love—why were we blind to this for so long, God forgive us?—and others feel the crumbling of all that is good and sacred around them.

Despite their best intentions or desires, those who once loved each other are scarcely able to resist demonising each other: “You are from your father the devil.”
“ The Jews answered him, ‘Are we not right in saying that you are a Samaritan and have a demon?’”  (John 8:44, 48)

So sooner or later, Christians blame all Jews for the death of Jesus. Jews think Jesus has the devil in him. And whoever has political power will visit death upon their family in the faith. The bread of life will become food for fanatics, and the love of God will become a law of hatred.

We see this all through the history of Europe. We see it in prejudice against Christians in Israel today. We saw the same dynamics tear us apart in the Uniting Church, as we fought over God’s love for lesbian and gay people.

I know where John is coming from. I said the harshest things about folk with whom I disagreed during our arguments over sexuality. The hurt is not yet healed. Speaking the truth in love seemed almost impossible. The negative implications of John; the hatred that has Jewish Jesus saying the father of the Jewish people is a devil, comes from this sort situation. It is, and it was, sadly, love fighting for survival, and so corrupted. How will this be healed?

If we are to learn from John, we need to find the love, and reject the fear and hatred of the fight, which still clings to it. Otherwise I will ultimately say that the kind and loving, and obviously godly, Jewish folk who once showed me around their synagogue and museum, have the devil as their father.

It is easier to understand such language if we examine the positive statements. Those who respond positively are special. Part of the language of being special is to say that they are chosen, given, especially drawn. It is doxological language. We see similar language used in romance when people declare that the other is the only possible partner ("you were meant for me"), whereas the chances are that they could have a successful marriage with a number of people. We understand the way such affirmations work. They are not accurate descriptions, but celebratory statements. What they are doing is more important than what they are literally saying.

As I seek to explain this to myself I turn first of all to one of my favourite xkcd cartoons. 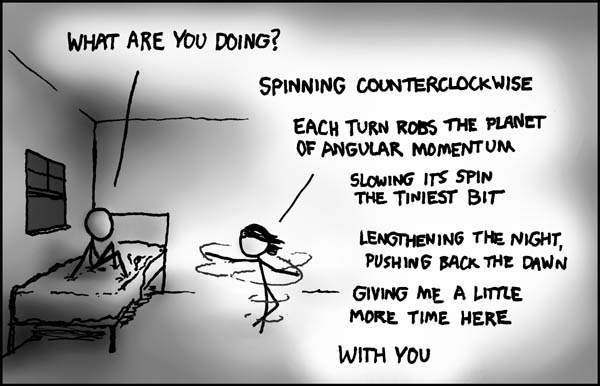 Clearly, this is absurd. It is also profoundly true in its witness to the depths of love, and our hunger to be loved. It is the language of love.

In one sense, our whole Faith is the language of love. Brian Stoffregen remembers

a former Muslim speak[ing] about his conversion to Christianity. One of the major things that attracted him to Christianity was that it is so absurd. God who is born and dies! Salvation that begins by declaring that you can do nothing to save yourself! It either had to be true or the people proclaiming and believing it were crazy. Why does anyone believe this stuff? It's a miracle from God.

Love sees that God has sent us food that gives eternal life; life that is beyond what we have seen; life which is “in love,” filling us, and sustaining us in a way we never imagined possible. It makes us giddy with joy. We commit ourselves as bride in this new relationship. Some of us will be dippy and fey, and look and sound like we have been lifted out of that xkcd cartoon. Other of us will be quieter, more grounded, perhaps, but no less in love.

There will be “corkywood times”.  As I walked a young woman home, I fell out of love, just under a corkywood tree in the main street of Ernabella. I saw the absurdity of what was happening, the ridiculousness of the notion that we would ever live together; that we could be something. I had to learn to love properly; that post infatuation love of spouse , and church, and God, which commits in an even deeper absurdity because it sees with more opened eyes, and yet stays because it is loved!

I will seek to remember the girl in the cartoon with her whimsical giddy joy, and the deep, deep love of my wife. And I will watch the young couple in love in our house and remember the joy and the wonder and the plain goodness that is people.

And perhaps this time I will invite you to Eucharist. Eucharist enacted without commentary; only the Words of Institution, no words as weapons.

And suggest we eat together, and talk about my work on the web, and your training for the marathon, or your love of your garden... anything but that which would divide us. This is not to avoid the elephant in the room, but to bring the elephant back to size; to let love live, rather than hate rule.

Is this the naive whimsy of a romantic, or plain lack of courage for the truth, retreating into poetry from the hard decisions of life? Or is it seeking the same profound depths of the Father’s love which John sensed; John who surely now regrets the words of hate he put on Jesus’ lips?

I am the living bread that came down from heaven. Whoever eats of this bread will live for ever; and the bread that I will give for the life of the world is my flesh.’ (6:51) 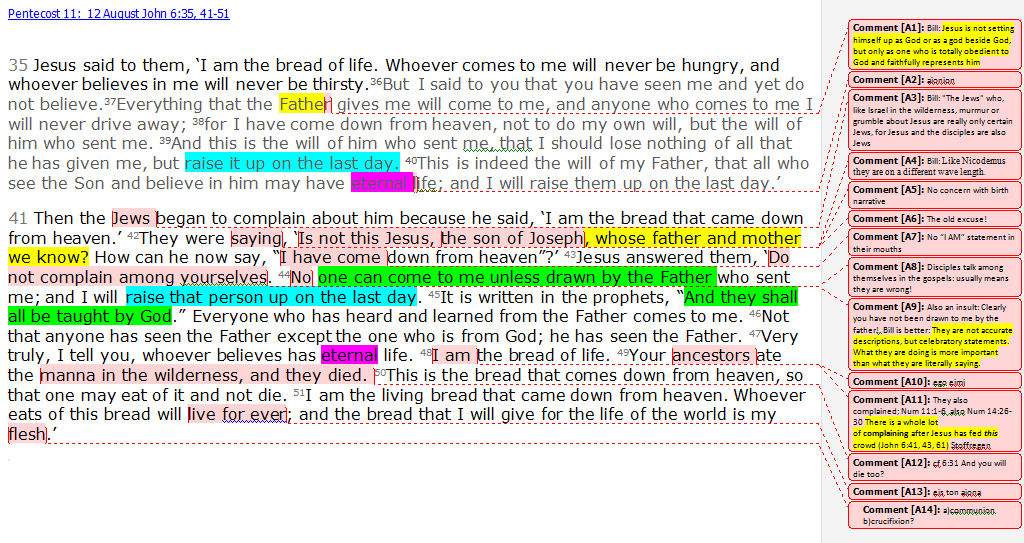 Great
Peet 03-02-2017
Great meditation. You certainly grasp the gospel, no, is grasped by it. many thanks