We live with a small white dog. I watched my wife walk from the front door to the other end of the house a few days ago. The dog followed behind, almost in step. Wendy continued to move around the house, and the dog faithfully followed.

I wondered if this is this how we should follow Jesus.

Then I thought, "What do we actually mean, ‘follow Jesus?' Do I ask, ‘What would Jesus do?'" I say to my congregation, "What would Jesus do if he were here in my shoes?" because the historical Jesus never had to think about cars, computers and climate change. Deciding what Jesus would today can be a major exercise in imagination!

And then I thought, "Which Jesus would that be?" There's a lot of debate about Jesus. What did Jesus really say? How much are the gospels putting words into his mouth? The Gospel pictures of Jesus all differ.

April DeConick says of one portrait of Jesus that ... "it is bankrupt, as is the Jesus Seminar Jesus. This Jesus is nothing more than a constructed person who exists only in our imaginations."

This is not a new insight. Albert Schweitzer's book The Quest for the Historical Jesus showed that historical constructions of Jesus "uncannily matched the beliefs and agenda of the scholar in question."  But, in case we think DeConick and other critics of the Jesus Seminar are simply reactionary, they would agree further with Schweitzer; he "knew the Christ of orthodoxy was not the historical Jesus either."

The Jesus we know is a product of our imagination. In an internet discussion of the issue, John Shuck said to April DeConick

John, yes you are correct that Mark's Jesus is also a construct. As is Matthew's, Luke's, John's and Thomas'. But we can't equate a construct with "ahistorical" nor is it accurate to consider one construct "more historical" than another. Each gospel has constructed a Jesus that supports and represents its own theology...

Because something like Jesus is constructed isn't the same thing as saying Jesus didn't exist...

You are right that the TJS's Jesus serves us. That was why he was created by us in just the fashion that he was. And he is serving many well and I imagine will continue to do so even in the face of bankruptcy.

Yet, there is a theology behind the various historical Jesuses that I like.I like that poet/rebel/healer fighter for peace and justice who sticks it to the man. He lives his integrity to the death and thus inspires change and hopeDid he exist? No. He's a construct that resonates with many including me. Like you say, I don't think that construct is more or less historical or necessarily more or less interesting than anyone else's including all the various constructs of early Christianity.

This can all be quite exciting if one is not threatened by modern scholarship. But sooner or later something occurs to us. It's well described by Shuck's closing words:

I suppose the hard part to face is when we realize that our construct is just that and stop pretending that it is the real or authentic/historical thing.

How do we know our Jesus is any more real or accurate than any other Jesus? Which Jesus will we follow? Some earnest brothers and sisters will tell us that if we "know" him, or "meet" him, the problem does not occur. This is naive at best; the Jesus we "meet" is also a construct of our imagination.

Are we doomed to be like a little white dog, faithfully following behind our favourite Jesus? Or do we decide there is nothing which we can know for certain? If so, who do we follow? Or what?

The problem arises because we persist with the mindset that we are discipling ourselves to an historical Jesus. What if that was not our aim?

What if we simply desired to live a life worth living? What if we desired to make the best of what and where we are, and accepted that everyone's knowledge and ideals are imperfect, and limited, and full of contradictions and compromise? What if we are seeking God wherever God may be found?

For me, a life worth living would be being able to look back without being too regretful. I have much to regret, but my living of the Faith has steered me away from a life I would profoundly regret. I think of the dying man who hired a black and white TV for his hospital room. He had calculated the saving over a colour TV, and the exact amount that saving was adding to the daily interest in his investment accounts. I remember the rednecks who clapped and cheered during a night's shelf packing in Coles, when the news came through of Lindy Chamberlain's conviction for murder. Or the embarrassed silence at a genteel Eastern Suburbs dinner party when it came out that I live in Elizabeth.

However, I suspect this bias was latent within me before any "steering." When I was about 10 I had a profound experience of alienation. As I grew and was more able to critically analyse the experience, my path in life was already shifting. So before Jesus, consumerism was false for me. Before Jesus, I was reacting against the toffy side of town and its social pretentions. Before Jesus, I had decided on Conscientious Objection to Vietnam.

It's not the deciding the impossible question of which Jesus I shall follow that is transformative for me. "Following Jesus" is not about deciding who he was in that sense at all. Following is about struggling with the stories, seeking their meaning, and shining them on myself and my life. It doesn't matter exactly who Jesus was, or exactly what he said. As in the cliché, the journey really is the important thing....

The little white dog is a lot like me. She spends a lot of time staring out the window. She finds a new toy or a chew stick, and carries it everywhere and plays with it constantly. Then it's dropped and forgotten. And she has a stuffed bear. It used to be bigger than she was! For years now, she has dragged the bear out of the toy box, and growled and wrestled, and shaken it. Then she climbs on the couch, turns around a few times, and sleeps peacefully. 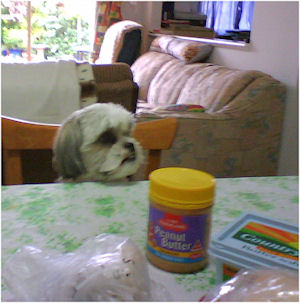