Where God is Today...

You are here: Home» Thoughts» Where God is Today... 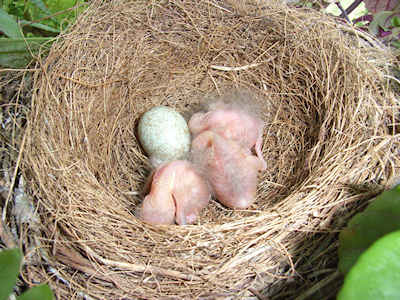 The blackbirds built a new nest in the hanging basket next to the one they used last year. It must have been warmer this spring; most of the time the four spotted eggs lay untended. Last year, the female would stay on the nest even as I watered the pot beneath her! I first saw her as I poured water over her; she never even flinched. We found those eggs broken on the bricks of the nursery floor. This year, they all hatched; four featherless, all-beak lumps. They in a few days, were hopelessly over crowding the nest in a week, and on the tenth day were down scurrying among the nursery pots, in between short, wildly flapping flights.

On day twelve the neighbour's cats killed one. Now, at three weeks, the tail feathers have finally grown. They fly well. I know at least one has survived.

The wonder of it all is that any survive the spring of marauding cats. It amazes me that a pair of birds come back to the same place each year. How is it that these pests, which spend the year competing with a dozen others to dig up our pots, and tear up the mulch, suddenly get the run of the nursery to themselves, and charm our hearts?

It's beyond wonderment that I should even exist to notice it.

We somehow cease to notice, let alone wonder, that I am writing this on a train during a daily commute that was a day's journey for my grandfather. I write on a glass screen, with less than perfect results it is true, but my father began to write with chalk on a slate, and remembers the first ballpoints. Perhaps we do not wonder at these things because they are ephemeral wonders, little nothings in The Whole Scheme of Things. What are they compared to the fact that there is anything at all?! What are they when the collection of atoms and molecules on the next seat looks out the window, and He and I apparently see pretty much the same thing. We both smile at the toddler acting up on the platform.

Cause we're all just protons, neutrons, electrons,
that rest on a Sunday, work on a Monday and someday soon...
I'll be sitting on the porch with you ....
Then I'll die and I'll fly off into the blue... (The Cat Empire)

Just protons, neutrons, electrons...? you must be kidding.

As I sat at breakfast and coffee this morning, I saw the male blackbird begin flying into the shade house with twigs and tufts. Surely not another nest this season?! I began to think about Geoff again; four years younger than me. Why should he die? It's been in my head all week, that this is the wrong question. It's a natural enough question, but when I look at the richness and intensity of everything around me breed, driven to create, and to build; and when I see how much of it fails, and how fragile it is; I wonder if the question should not be, "How did any of us make it to 49 years old?"

The fact that those protons, neutrons, electrons and all the other bits hold together, and carry sentience despite all the instability and vagaries of biological structures would be in-credible if it were not that we see it, and are part of it. In my time, I've fallen asleep at the wheel, fallen off a windmill, and fallen down a cliff whilst holding a loaded rifle. I've been splattered by ricocheting bullet fragments, passed out with anaphylactic shock- no idea what happened after that, and broken bones and ripped flesh. In reflective moments I'd sometimes wonder how come I survived. But that survival is nothing beside the absolute wonder that there is anything instead of nothing. And it's not even a small wonder alongside the mind stretching intricacies that constitute cellular life, with all its fragility and uncertainty.

Some religiously inclined people act like they have God all sorted out and defined when we don't even begin to come near to fully understanding ourselves, body or mind. Other folk, non religious, seem to think that we will understand; in essence it's all just protons, neutrons and electrons. The best theology has always understood that if we think we have defined God, or understood God, we are wrong. God, the Mystery, is beyond us. Or as another tradition says, if you meet the Buddha on the road, kill him. Even if one has no wish to personalize the ultimate reality of what is by calling it God, the same barriers apply. How can we hope to understand, except in the haziest way, the full reality which gives rise to us?

This afternoon I go to visit a friend whose body was torn open by war. The memories have bubbled up and torn open her mind once again, and she's back in hospital. I will have no answers, just like I have no answers about Why Geoff. I'll come out from the ward "less than happy" because childhood hospital trauma still messes with my head. So I will walk out into the park and look at those ubiquitous blackbirds, and remember and remind myself of the mystery and the wonder, and let myself fall in love with it again, so I can catch the bus and the train home.

At my ordination we said all the words... and a friend who came said, "My God... you believe all that stuff?!!"

I believe in god the father almighty, maker of heaven and earth... that's how they said it in past days.... and I watch the blackbirds in the garden, and let the signal stars lift my soul into the darkness of the night... and in jesus christ, his only son, our lord.... now there's a life worth following, what would he do in the hospital... and I remember Geoff... and Nairne... and the words are different, but the song's the same.

O Lord, our Sovereign,how majestic is your name in all the earth!
You have set your glory above the heavens.
Out of the mouths of babes and infants
you have founded a bulwark because of your foes,
to silence the enemy and the avenger.
When I look at your heavens, the work of your fingers,
the moon and the stars that you have established;
what are human beings that you are mindful of them,
mortals that you care for them?

Yet you have made them a little lower than God,
and crowned them with glory and honour.
You have given them dominion over the works of your hands;
you have put all things under their feet,
all sheep and oxen,
and also the beasts of the field,
the birds of the air,
and the fish of the sea,
whatever passes along the paths of the seas.

O Lord, our Sovereign,
how majestic is your name in all the earth! (Psalm 8)