You are here: Home» Thoughts» The Real Problem with Live Meat Exports

Who could defend sacrificing animals? Really. Isn't it just barbaric and shouldn't we admit that it is a primitive relic of an ignorant time? As someone who has not eaten chicken or meat for decades, I would nonetheless like to speak up on behalf of sacrifice.

So begins a short piece by Rabbi David Wolpe at Huffington Post. It's worth the read in light of our recent controversies in Australia about the export of live cattle to Indonesia, where they are allegedly sometimes killed in cruel ways.

As someone who has seen cattle loaded onto trucks for the abattoirs, I think even a protracted death on the killing floor is the least of the problem here.  Cattle spend many hours crammed into the back of trucks open to the weather. They are often loaded, in my experience, with gratuitous brutality. And then, as Wolpe says, they are butchered in a process that is sterile of respect and of dignity. Our mass slaughter of animals is an aberration against goodness.

Some of these cattle will have been standing weeks and months in a feedlot not dissimilar to chooks in cages. 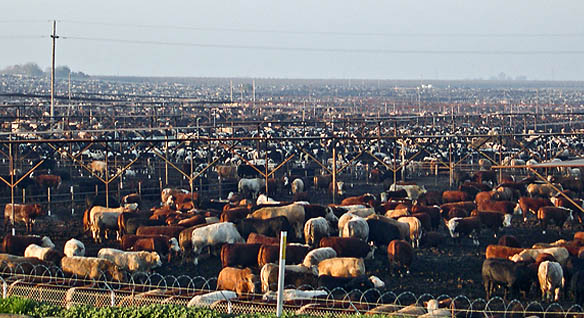 Our outrage at Indonesian slaughterhouse practice betrays our blindness to an inhumane meat industry in Australia. A bolt through the brain after days or months of ill-treatment is a very small mercy, and excuses little.

The Kalahari bushman is said to kill reluctantly, and apologises to the dying animal. I have seen the same with farmers killing a sheep for meat. This is not some sentimentality. It is recognition of our connectedness to all life. The same recognition is behind the saying of Grace at a meal.

The pr-eminent sin of the meat industry in Australia is not in the sending of live cattle overseas. It lies in our insistence on cheap meat, which drives small butchers and slaughterhouses out of existence, and grows feedlots, and treats animals as a commodity no different to iron ore. It lies in our wilful blindness and hypocrisy about Indonesian meat practices while we make meat an indulgent staple instead of a reluctant necessity.

Wolpe concludes with these words, and he is correct:

We see sacrifice as primitive because most of us are sheltered from the reality of what we eat. One of the reasons I do not eat meat is the realization that buying meat is a sleight of hand: The consumer decides not to watch how cattle are raised or killed so that she can simply whisk away the clean wrapped cut.

The ancient Israelite knew what he was offering; he had raised that animal, fed it and was now participating in a fully conscious decision to bring it to its death at the altar.

At the Temple, the priests presided and Psalms were sung. When we buy at the supermarket, we check the USDA inspection sticker.

Now, who is primitive? (Read the article)