You are here: Home» Thoughts» More Thoughts...» Contrasts and Commonalities

When I left Adelaide at 7.30am it was cold and raining. After five hours of dusty airstrips and endless desert, the plane landed at Ernabella. There it was 45 degrees in the shade! The first days blurred past me in a constant stream of black and brown faces I could never distinguish. Slowly it became home, and dearly loved. Friends were made and family gained. High hills and hanging valleys became landmarks of my soul.

One day I had to meet a bus a hundred miles away at Kulgera. The bar was crowded with a couple of rednecks, so I sat on the fence outside. A lone aboriginal man sat nearby and we struck up a conversation. His English was bad and my Pitjantjatjara was worse, so we were soon sitting in a companionable silence. Two shining new cars drove in off the South Road. They were so clean they must have stopped to clean the dust off when they reached the Territory bitumen! 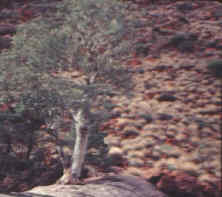 Understand Kulgera was only a pub and a police station in those days, so when 8 young Japanese students hopped out they were quite a crowd! Almost a swarm! They all wore glasses and at least three of them had cameras.  My friend and I watched bemused, wondering why anyone would ever want to photograph anything at Kulgera, let alone so many times! He leaned slightly towards me and mumbled something. I didn't hear it properly, and since he spoke in Pitjantjatjara would not have expected to understand much of it if I had! And yet, in that echo of the mind that often fills in the gaps for the slightly deaf, I heard my first, pure, untranslated Pitjantjatjara. He said, "They all look the same don't they?"